Man Van Tan, for example, has had the habit of closing the door tightly for tens of years. He only opens the door by half when someone comes in and then closes it again. Then he uncovers the plastic canvas over the sofa, and asks guests to take a seat. 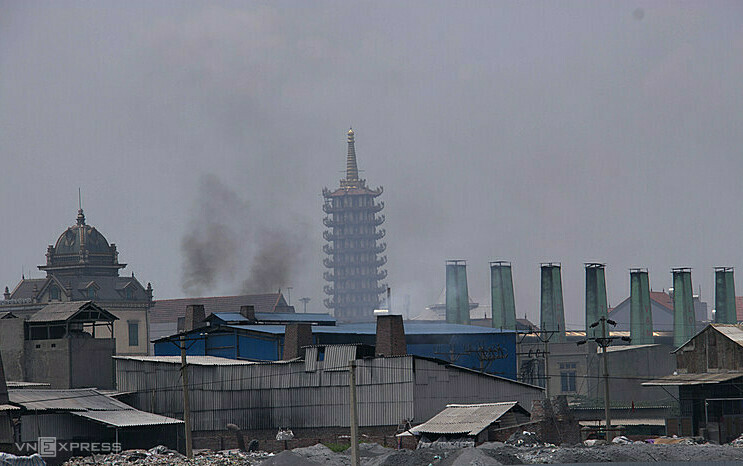 Plastic canvas is also used to cover his bed, clothes, TV and the altar. This helps protect his family members from the dust, which is abundant in Van Mon craft village.

Just one kilometer far away from Quan Do is Van Mon Craft Village, which is covered with the black color from the 400 chimneys of metal recycling workshops.

When Tan began taking this work in 1968, there were only six metal recycling workshops in the village. The workshops collected aircraft wrecks and bomb shells to make pots and pans. Now, there are 400 workshops which cast ingot metal from scrap.

A survey conducted by the Bac Ninh provincial environment monitoring station in 2011 found that the suspended dust, SO2 and NO2 concentrations in the craft villages exceeded national standards by 4-5 times.

On the first days of December 2019, the air quality in Van Ha commune of Dong Anh district in Hanoi, 22 kilometers far from Tan’s aluminum recycling workshop, was always bad.

There are 62 craft villages and 32 industrial clusters, covering a total area of 864.89 hectares in Bac NInh province. In 2008, three villages found their names in the Ministry of Natural Resources and the Environment’s list of craft villages that caused serious pollution.

Tan said his workshop every day can cast more than 1 ton of aluminum and produces 300 kilograms of slag. However, he doesn’t know how much dust and smoke, and what kinds of emissions are generated by the 400 40-meter tall chimneys in the village.

“The dust and smoke cannot go too far and wont’ reach Hanoi,” he said.

However, agencies don’t think so.

Old vehicles in HCMC to be removed to address air pollution

HCMC is mapping out a plan to control vehicle emissions on a trial basis from January 2020, aiming to terminate old transport vehicles to reduce air pollution in the city.