Vietnam, together with China, Indonesia, Uganda, and India, are set to be among the fastest growing economies in the world by 2030, according to researchers at the Growth Lab of Harvard University. 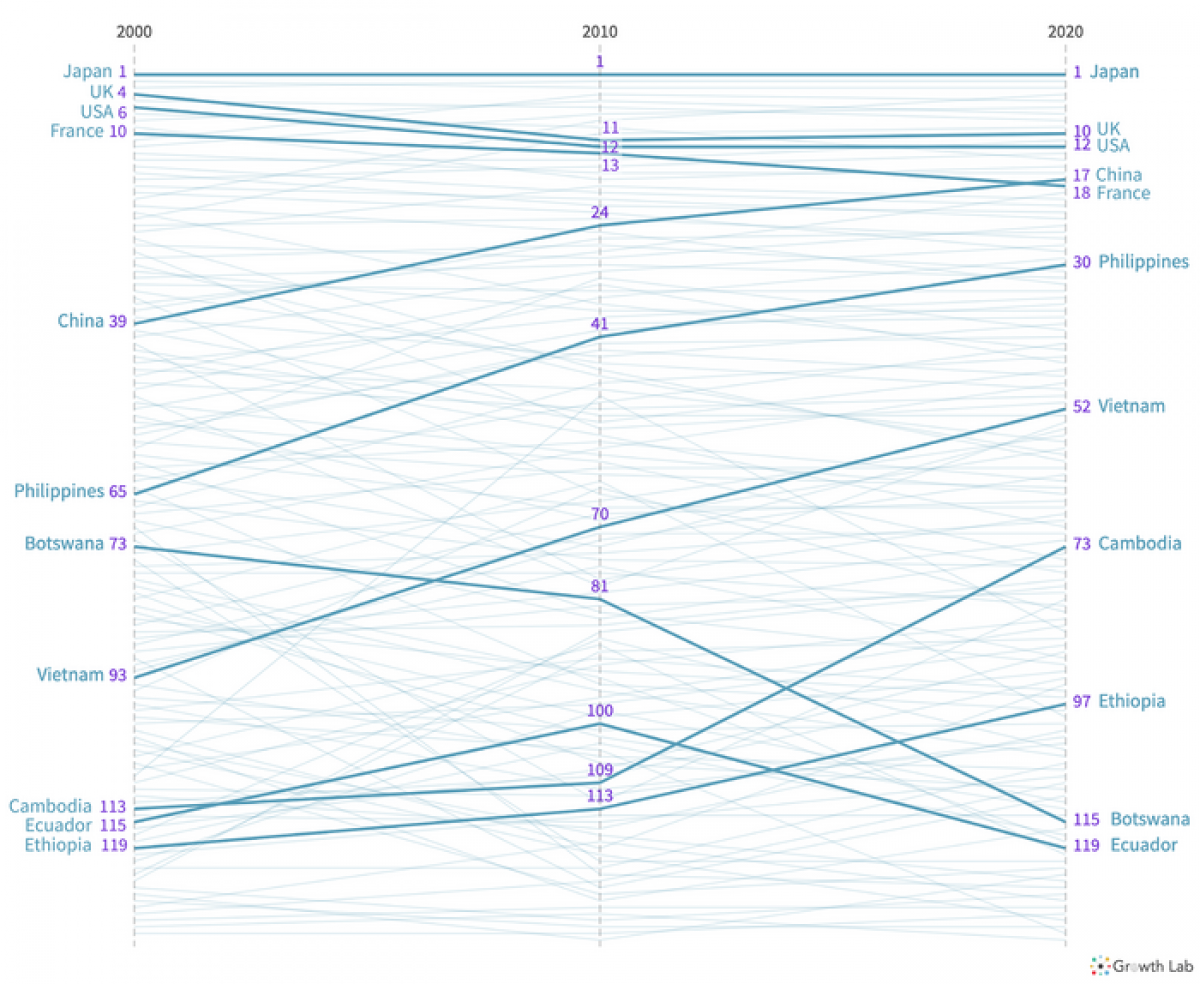 Vietnam has jumped 18 notches in the ECI rankings from 2010 to 2020. (Photo credit: the Atlas of Economic Complexity)

Presenting the latest growth projections at the Atlas of Economic Complexity, researchers on July 27 noted that long-term growth is anticipated to take off in Asia, Eastern Europe, and East Africa once the negative impact of the pandemic subsides.

These predictions were set out by Growth Lab researchers after they released new country rankings of the Economic Complexity Index (ECI), which assesses and highlights the diversity and sophistication of the productive capabilities embedded in the exports of each country.

Japan tops the rankings, followed by Switzerland, Germany, the Republic of Korea, Singapore, the United Kingdom, the United States, China, and Italy.

Among the economies which have made the greatest strides in improving their complexity are Vietnam in 52nd place, Cambodia in 72nd place, Laos in 89th place, and Ethiopia in 97th place.

The researchers all agreed that Asia, East Africa, and Eastern Europe would be three growth poles in the world by 2030. In Asia, China, Vietnam, Indonesia, Cambodia, India, and Malaysia stand out as the countries that could potentially record the fastest growth over the coming decade.

Elsewhere, Uganda, Tanzania, and Mozambique are among those in East Africa which are expected to experience rapid growth, though this is likely to be driven more by population growth than gains in economic complexity.

Eastern Europe boasts strong growth potential due to its continued advances in economic complexity, with Georgia, Lithuania, Belarus, Armenia, Latvia, Bosnia, Romania, and Albania all ranking in the projected top 15 economies on a per capita basis.

According to Prof. Ricardo Hausmann, director of the Growth Lab, the COVID-19 pandemic marks the first time that the service industry has become an important part of global trade.

Economies such as Jamaica and Kenya which rely heavily on service exports, especially tourism, have suffered heavy losses in their export earnings since the pandemic initially hit. Meanwhile, countries that are able to diversify their export structure like Thailand can flexibly switch production between different industries as a mean of limiting damage to the economy.