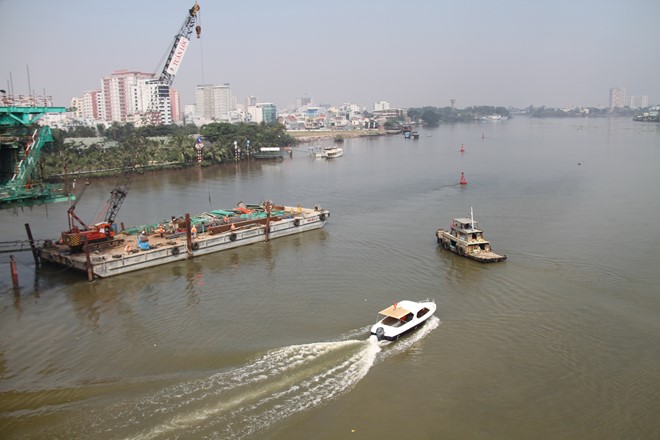 As reported by the city’s People’s Committee, the salinity measured on the Dong Nai river section which runs across Nha Be district at one time reached 12.24 per thousand, while it was 9.08 per thousand in the same period last year.

High salinity has also been reported for the areas of Ong Thin Bridge and C Canal – Cho Dem in Binh Chanh district.

In order to ease the salinity of the major rivers such as Sai Gon and ensure the sufficient raw water supply for water plants in the city, the Dau Tieng Water Reservoir has six times began discharging water early this year. About 73 million cubic meters of fresh water have reached the Sai Gon River.

Therefore, the volume of water discharged to the Dong Canal fell on the days from April 1 to April 15, while the discharge has resumed since April 16 to serve the summer-autumn rice production.

This year’s dry season is expected to last until the end of June 2016. From now to that moment, the salinity of the rivers and canals in the city would increase.

Dau Tieng – Phuoc Hoa, an irrigation service company, will work with the hydropower water reservoirs on the upper course of Be River, including Thac Mo, Can Don and Srok Phu Mieng on a plan to discharge water to the Phuoc Hoa Water Reservoir.

HCM City not only needs water for people’s daily life, but also for agricultural; production in the districts of Binh Chanh, Hoc Mon, Cu Chi, Nha Be, Can Gio, Binh Tan, 9 and 12 with the total production area of 21,670 hectares in the summer-autumn crop.

The local authorities are considering building a reservoir to contain raw water in the suburb district of Cu Chi in 2016-2017.

The reservoir is expected to cover an area of 23 hectares and the capacity of 1.35 million cubic meters.

The reservoir, once it is built, would ensure raw water supply for the Tan Hiep Water Supply Plant to run continuously for 1-3 days in case of saline intrusion and pollution on the Sai Gon River.