HCM City authorities are seeking solutions to deal with the buried rubbish polluting the area.

The problem was discussed during a meeting with HCM City authorities and sanitation companies on August 10. There are many landfill sites around HCM City, but many have been filled and closed long ago.

However, there is no suitable solution to deal with remaining and future rubbish, nor how to free up land plots in the city.

Nguyen Toan Thang, director of the Department of Natural Resources and Environment said both Go Cat and Dong Thanh sites have been closed for decades so investment to deal with remaining rubbish could now be called for. As of now, they have received proposals from 10 firms.

Nguyen Cong Hong, director of TDH Ecoland Urban Development and Investment JSC, said they had to deal with the rubbish on the spot and avoid bringing the rubbish to another location which might cause more pollution and higher costs for the project.

Hong said had experiences after dealing with the rubbish in Hai Duong Province in 2011 and they would recycle the rubbish at Go Cat and Dong Thanh sites. The buried rubbish would be unearthed and classified.

"The area around the landfill site has also been polluted. If we are given the project, we can deal with the rubbish in two years and a new green urban area will appear a year later," he said.

Nguyen Thien Nhan, party secretary of HCM City, said the authorities had opted more recently to recycle rubbish into electricity instead of burying it. However, they still have to deal with the enormous amount of buried rubbish in the past and free up some lands.

"We treasure every opinions and contribution. When someone shares his or her opinion, at least the related department must listen and think about methods to support and boost those ideas," he said. 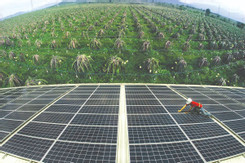