HCM City to curb flooding with Japanese technology in reservoirs 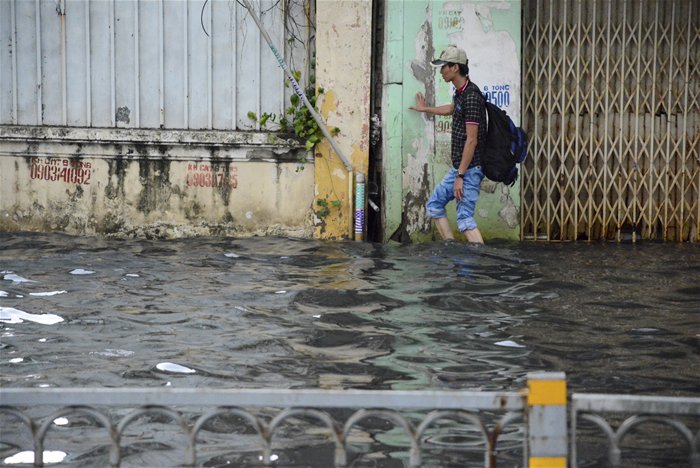 Experts all agree that water reservoirs are a good solution to the flooding. The reservoirs may store tens of millions of cubic meters, thus reducing the flooding by 30 percent.

Sekisui has got the nod from the city authorities on the building of an underground water reservoir with the capacity of 100 cubic meters. The expenditures will be funded by Sekisui, while it will take about nine months to carry out field work and execution.

According to the investor from Japan, the material to be used to build the reservoir is called ‘cross – wave’ which has high mechanical durability, is easily installed and uninstalled and favorable for construction.

The technology can be applied to small and narrow sites, while the water storage space is up to 90 percent and is friendly to the environment.

After the construction of the underground reservoir is completed, the dirt removed will be given back to public works such as parking lots, parks and stadiums with the vertical load capacity of up to 25 tons.

According to the HCMC Anti-flooding Center, the building of the reservoir with the special material suggested by Sekisui is very useful. It will help the city authorities choose the best solution to prevent flooding in the future.

In 2015, the municipal authorities chose several places for the rainwater storage system it planned to build in order to ease the pressure on the common drainage system.

The rainwater storage system comprises reservoirs located in residential quarters, and offices which can be used for the cleaning and watering.

Besides the new water reservoirs to be built, some existing lakes will be expanded and upgraded to serve as water regulation reservoirs.

These include the lake in the Linh Dong Park in Thu Duc district, covering an area of 8 hectares and a 2 hectare lake in the 87-hectare land plot in An Phu Ward of district 2.

The lakes in An Lac ward’s Park, in Binh Tan district, Song Tan Pond in district 7 and some other districts are also under consideration.

Experts said though the land in the city is limited, building water reservoirs remains a feasible solution if the city can use the underground reservoirs in harmonization with public works.