High-school students to have only three compulsory subjects

Under the draft plan of the Vietnamese comprehensive education renovation, Vietnam will still maintain the 12-year general education system, including the 9-year basic education for primary and secondary education.

VietNamNet Bridge – Under the draft plan of the Vietnamese comprehensive education renovation, Vietnam will still maintain the 12-year general education system, including the 9-year basic education for primary and secondary education. Meanwhile, high school students would follow a high curriculum with only 3 compulsory subjects. 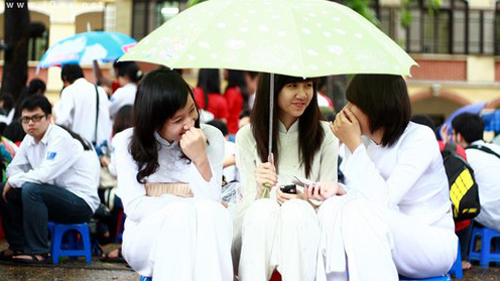 The Ministry of Education and Training has released the draft plan on renovating the Vietnamese national education for public opinions.

The upper secondary education would be understood as a higher education which helps students choose their jobs for the future.

If the suggested draft education renovation program is approved, the upper secondary education would comprise of three compulsory learning subjects and three optional ones, instead of the 13 compulsory subjects as currently applied.

According to the Ministry of Education and Training, there are two different viewpoints about the number of academic years needed for general education.

Some believe that the 11-year general education system would allow cutting down the expenses, while helping students make their ways in the world soon or facilitate their higher education.

Hien has pointed out that if Vietnam applies the 11-year general education system, while students go to school either in the morning or afternoon, the total number of learning hours would decrease sharply, which would badly affect the education quality.

Meanwhile, Vietnamese conditions are not good enough to organize 2 teaching sessions per day. If it tries to do this, it would have to increase the number of classrooms and have more teaching aids.

If the 11-year general education system is applied, students would finish high school at the age of 17, when they are still not mature enough to fulfill the duties and the interests and duties of citizens.

The education renovation programmers believe that it is very necessary to change the teaching method and drive it towards the integration and differentiation.

Primary schools would focus on teaching math, Vietnamese language, morality, the nature and society to the first, second and third graders, which would be integrated with the important issues, including the environment, climate change, life skills, population and reproductive health.

The fourth and fifth graders would learn science and technology, learn about the natural and social matters which would be built up on the basis of the current history and geography programs.

Secondary school students would have two new subjects, including natural sciences (which would be built up on the basis of the current physics, chemistry and biology programs), and social sciences (history and geography).

The 10th graders would have 7-10 compulsory subjects, while they would be able to learn optional subjects and attend optional education activities. This would allow them have better knowledge about different fields, thus helping make decisions about their future jobs.