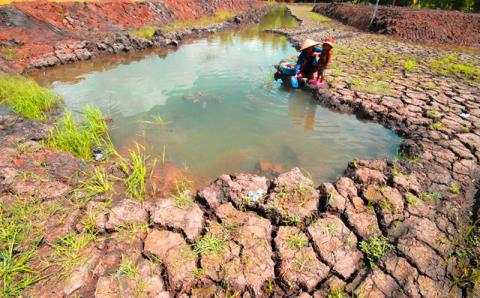 The situation will be even worse if the two hydropower projects become operational.

In the past, when there was no hydropower plant, the Mekong Delta had big floods every year which brought sand, alluvium and fish. The floods also helped reduce salinity to grow rice and do intensive farming.

The situation began to get worse after China, Laos and Cambodia built large hydropower plants.

Scientists have estimated that Pak Beng, Xayabury and Don Sahong will cause the Mekong Delta to lose 5 percent of alluvium.

The total monthly flow capacity will decrease by 6.2 percent, which will lead to consequences in aquaculture, landslides, and saline intrusion, thus affecting the lives of millions of Mekong Delta’s people.

The project to build the Sambor hydropower plant on Mekong, which is supported by China, will bring energy benefits to Cambodia, but Vietnam’s Mekong Delta will suffer.

“Mekong Delta’s people will sustain the negative impacts from the works on Mekong mainstream. The situation is really worrying,” Hoa said.

In 2014, Vietnam had to work with governments of other countries and ask them to discharge water from their hydropower dams. Hoa said the negative impacts have become visible and are getting more serious.

According to Hoa, Mekong Delta’s provinces have held many working sessions with the Vietnam Mekong Commission to discuss solutions.

The commission will regularly work with agencies of China, Laos and Cambodia on providing water to Mekong Delta.

In the dry season, for example, when Mekong Delta lacks water, the commission will ask for the government’s permission to work with agencies, asking them to discharge water to the Mekong Delta.

In the rainy season, if hydropower plants discharge water, the Mekong Delta will have to bear serious consequences from the discharge.

Hoa urged the government to strengthen diplomatic solutions and take the initiative to mitigate possible damages.

“It would be better if countries can have consensus in operating hydropower dams to ensure enough water for the Mekong Delta,” he said.

“Vietnam needs to apply diplomatic measures to restrict the building of hydropower dams on the Mekong upper course and find solutions to floods in the rainy season and drought in the dry season,” he said.