iPhone 11 price falls after one month in Vietnam 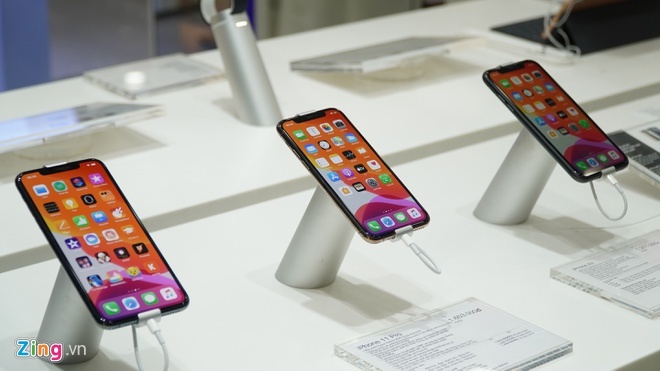 Meanwhile, the price of iPhone 11 Pro has decreased more sharply to VND33.5 million.

According to Dang Thanh Phong, the media executive of a large retail chain, retailers are running sale promotion programs to stimulate demand in the year-end sale season.

Previously, when selling high-end mobile devices, sale agents sometimes offered gifts to attract buyers. The gifts were only offered to clients who booked products in advance. However, now, even clients who don’t book iPhone 11 in advance can also receive gifts and vouchers worth VND1-2 million.

Meanwhile, smaller retail chains subtract money directly from product selling prices instead of giving gifts to customers. That has never happened before because it could affect the pricing policy.

“Every retail chain has its own sale promotion program to run in the year-end sale season to boost sales. This is the right time for users to buy iPhones because the price of products won’t change until the end of the year,” said Nguyen Bich Hanh, the representative of another large retail chain.

Also according to Hanh, in previous years, there was nearly no sale promotion program for iPhone. The manufacturer suggested the quoted retail prices and large resellers had to follow the pricing strategy strictly.

However, Apple seems to better understand Vietnamese consumers who like to buy products with discount rates and gifts. The manufacturer has ‘given sale agents a free hand’.

According to Zing.vn, if buying products from smaller sale agents, Vietnamese consumers can obtain iPhone 11 at the price of VND19.5 million for the 64GB version. The price is just VND1.5 million higher than the product brought to Vietnam across border gates and distributed by private shops.

Analysts commented that the price gap between official products and products imported through unofficial channels has narrowed. Therefore, Vietnamese buyers now tend to buy official products rather than unofficially distributed ones in order to enjoy the post-sale maintenance policy.

Retailers all report that the sales of the iPhone 11 are very good, far better than XS Max. In the first week of sale, some resellers said they did not have enough products to deliver to customers, which had not happened in the past five years.