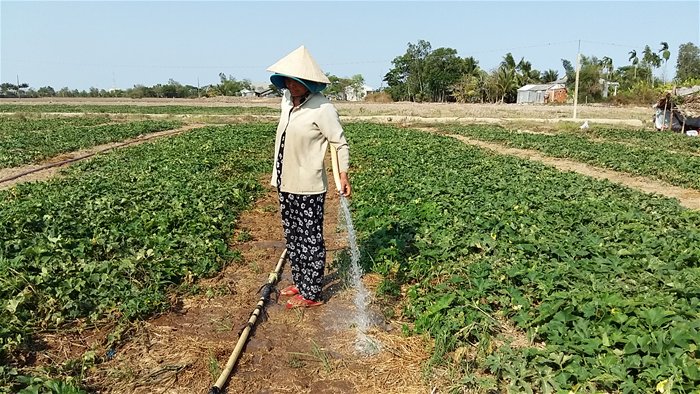 Piet Hoekstra from Utrecht University in the Netherlands cited a report of the ‘Rise and Fall’ project as saying that the Mekong Delta subsides 2-4 cm each year with the coastal lowlands being the most seriously stricken areas.

Ky Quang Vinh, chief secretariat of the Can Tho City’s Steering Committee on Climate Change, confirmed 2-4 cm subsidence each year in the area, saying that it was caused by the overexploitation of underground water.

“The underground water layers are getting nearly depleted with the water level falling dramatically,” he said at a workshop held in Can Tho City in late March.

Piet Hoekstra said that underground water overexploitation is the major reason behind the subsidence in Mekong Delta.

The expert said that thick compressed layers of sediment, and the development of infrastructure items such as roads, high-rise buildings, large construction works and geological tectonics faults are other causes of land subsidence.

Mekong Delta is witnessing big changes in the urbanization process and the use of land to meet socio-economic development goals. All of these factors have caused big challenges to the region.

One of the challenges, according to scientists, is the increasingly high demand for water for daily use and production. This leads to increased exploitation of underground water resources, which, in turn, causes underground water depletion and higher possibility of land subsidence.

The underground water overexploitation will lead to more saline intrusion, flood risks, and loss of arable land, and will affect infrastructure works.

“The underground water level has been decreasing in Soc Trang City, My Xuyen district and Vinh Chau Town,” he said.

The underground water exploitation has been banned in Can Tho City. However, the ban needs to be applied in other localities as well.

However, once Mekong Delta cannot exploit underground water, it would lack clean water for daily use and production.