Large-scale fields underdeveloped due to lack of capital

The large-scale field model has developed more slowly after a boom period.

Large-scale field model, a product of cooperation between agriculture enterprises and farmers, initiated by the agriculture ministry, has been implemented on a trial basis in Mekong River Delta provinces since the summer-autumn crop in 2011. 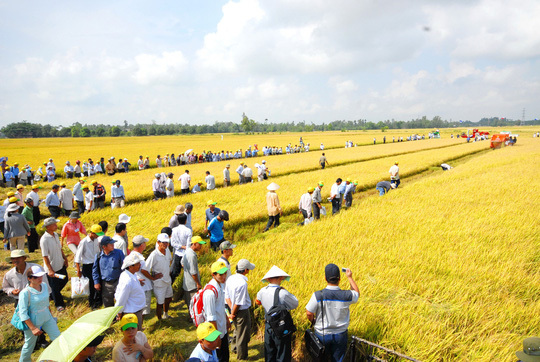 Witnessing the rapid expansion of large-scale fields, analysts then said ‘large scale fields are booming’. They also predicted that it would help change the face of agriculture, because only concentrated production in large scale could bring new value chains to agriculture.

Dong Thap province, one of the biggest rice producers in the ‘rice granary’ of Mekong River Delta, pioneered the large-scale field model.

The provincial agriculture department said that with the appearance of modern large-scale rice fields, the production technique of cooperatives has improved significantly. Since rice production is now mechanized, productivity and quality have been upgraded significantly.

However, the development of the model has unexpectedly slowed down in recent years. A report of the Plantation Agency under the agriculture ministry said the Mekong Delta had 170,000 hectares of large-scale rice fields in the 2017-2018 winter-spring crop, just 10 percent of total rice fields at the same time (1.68 million).

In addition, provincial farmers also joined forces with enterprises to cultivate on 22 large-scale fields more (20,000 hectares). However, the 22.237 hectares was modest if compared with the total area of 289,000 hectares of rice fields.

“Commercial banks refuse to provide loans, or they disburse capital in dribs and drabs,” he said, adding that at first, the company had 8,000 hectares of large-scale fields, but the area has shrunk to 5,000.

Vo Tong Xuan, rector of Nam Can Tho University, said farmers, who are used to small-scale production, should ‘think big’ and cooperate with enterprises to organize production on a large scale for bigger profits.

A tourism week is taking place in Tam Coc, Ninh Binh province, aiming to promote tourism in the locality during the summer when rice fields turn bright yellow and look majestic, romantic and poetic.