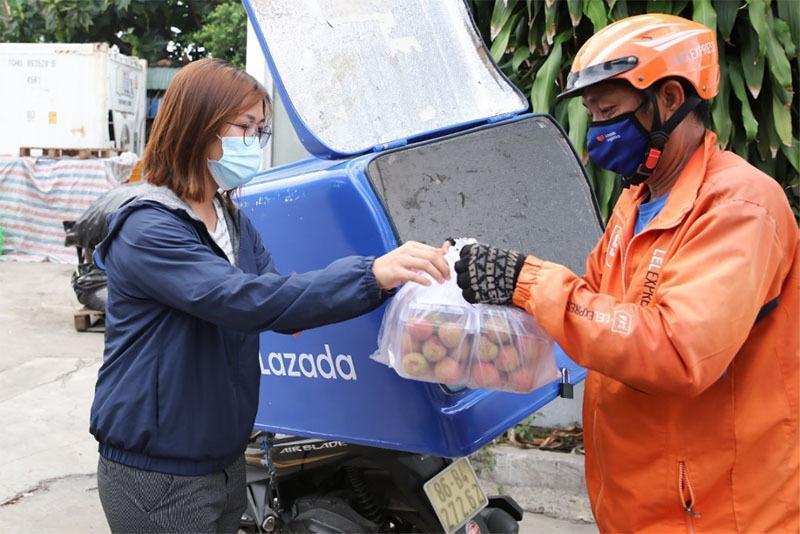 Lan said by this time last year, merchants had met him to order litchis for export. But he has not got any order this year. Other farmers have the same worry. In Bac Giang, it is now the high harvesting season.

As Bac Giang’s farmers need to sell 180,000 tons of litchis within two months, the Bac Giang provincial People’s Committee has asked the Ministry of Industry and Trade for help to build a program on boosting the consumption of litchis via ‘Giang hang Viet truc tuyen’ (Vietnam’s online stalls) and e-commerce sites.

The province believes that the new distribution channel on digital platform will help sell litchis and Bac Giang’s farmers won’t have to call for ‘litchi rescue’ campaigns.

Hai Duong’s farmers are also harvesting litchis. They export and sell litchis in supermarkets but also put sell on e-commerce sites, including Voso, Sendo and Lazada.

In fact, this is not the first time Hai Duong’s farm produce has been available on e-commerce sites.

In early March, when Covid-19 recurred in the province, social distancing imposed by the local authorities caused the farm produce distribution to get stuck.

At that time, Vietnam Post and Viettel Post activated a series of programs to support farmers to put their produce on sale on e-commerce platforms.

Vu Viet Anh, Deputy Director of Hai Duong agriculture department, said displaying farm produce on e-commerce sites would help boost sales. Litchis will be able to reach to consumers in many localities in good state, because e-commerce sites all have good logistics systems which deliver goods within several hours.

In 2020, when the Covid-19 pandemic broke out, the distribution of farm produce got stuck because of lockdowns, and some localities put their farm produce on sale on e-commerce sites.

Vo Van Be, Director of Java Tan Khanh Rambutan Cooperative, said he was happy as the cooperative’s produce has been selling better, while he has found new partners. Be said he can sign contracts on selling tons of rambutant each time.

Agriculture Minister Le Minh Hoan said the biggest problem for farmers for many years is that they cannot connect to the market. But now these risks have been eased.

“With the support of digital technology, it’s easy to find unsold farm produce. Then they put the farm produce on e-commerce sites for distribution. It’s so simple, and there is no need to call for the whole society to do charity,” Hoan said.

A report from the E-commerce and Digital Economy Agency showed that Vietnam is one of the countries with impressive e-commerce growth rates.

Google, Temasek and Bain&Company in a report predicted that Vietnam’s e-commerce would reach $43 billion and it would rank third in Southeast Asia by 2025.

Leaders of the Vinh Long provincial agriculture depatment also admitted that in the 4.0 era, developing e-commerce to help expand markets is indispensable.

However, farmers need to satisfy many requirements to put farm produce on e-commerce sites, including centralized production, traceability, codes and food safety.

The introduction of produce to partners to sign contracts also plays a very important role. Agencies and businesses need to support farmers in advertisement, marketing and logistics.

Vietnam Post and Viettel Post noted that farmers just focus on production, and have not got used to technology application and online sales.

They said that in order to improve farmers’ awareness and digital skills, it is necessary to offer on-job training.

Viettel Post decided to send groups of staffers to farms, gardens and cooperatives to guide them in how to create accounts, organize livestreams, and write introductions for their produce and run their stalls on the Voso e-commerce site.

In early May, Hai Duong farmers attended a training course on traceability and joining the national program on trade promotion on e-commerce platforms.

Hai Duong farmers have had initial achievements from digital transformation. Litchis have been selling well. On Lazada, half a ton of litchi sold out within four hours. Rong Do Company plans to sell 300 tons of litchis on e-commerce sites.