Nanocovax of Nanogen Pharmaceutical Biotechnology JSC is currently Vietnam's Covid-19 vaccine with the most potential. This vaccine is now in the third phase of trial, with the participation of 1,000 volunteers. So far, only 1 case of grade 2 anaphylactic reaction has been recorded, and this volunteer has fully recovered.

In phase 1-2 trials, Nanocovax vaccine was proven to be effective against the British and South African virus strains. Nanocovax is expected to be as good as foreign vaccines. If this vaccine is approved for use, Nanogen can produce 100 million doses per year. 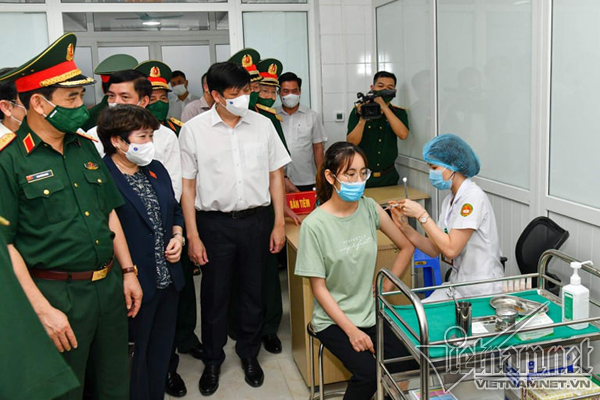 In the first two phases of trial, 100% of the volunteers had good immunity, and the seroconversion rate reached 99.4%, compared to 91-96% for Pfizer, 100% for Moderna, and 96-100% for Novavax - another Made-in Vietnam vaccine. The rate of side effects of Nanocovax is even lower than that of Pfizer and Moderna.

Nanocovax is currently one of 15 Covid-19 vaccines under Phase 3 clinical trial in the world.

General Director of Nanogen, Mr. Ho Nhan, said that in April 2020, the selection of vaccine production technology in the early stages was extremely difficult. However, it took Nanogen only one week to come up with the design idea.

"We use artificial intelligence with the support of leading robots in biotechnology research to help create fake spikes faster," Nhan said.

It took the research team a lot of time to fine-tune the gene segments as the virus constantly mutated to make the vaccine effective.

Recombinant protein technology has been used by Nanogen for more than 10 years, applied on bioequivalent drugs such as Nanokine, Pegnano, Pegcyte and Trastuzumab to treat anemia, cancer and other diseases.

The research team with more than 500 members began making the vaccine, with 300 people directly involved. After more than seven months, on December 17, 2020, Nanocovax started the phase 1 clinical trial and in June 2021, it launched the third phase trial.

Nanogen’s research director Do Minh Si added that while vaccines using mRNA technology such as Pfizer and Moderna use hundreds of materials sourced from dozens of countries, including many rare materials, Nanocovax uses a more common technology so its source of raw materials is stable.

Nanogen is building a cold storage system with a capacity of 10 million doses and 5 refrigerated trucks carrying vaccines at 2-8 degrees Celsius.