VietNamNet Bridge – McDonald’s plans to set up its first shop in Vietnam in early 2014. If so, the US giant is slower paced than many other rivals in the market.

VietNamNet Bridge – McDonald’s plans to set up its first shop in Vietnam in early 2014. If so, the US giant is slower paced than many other rivals in the market. 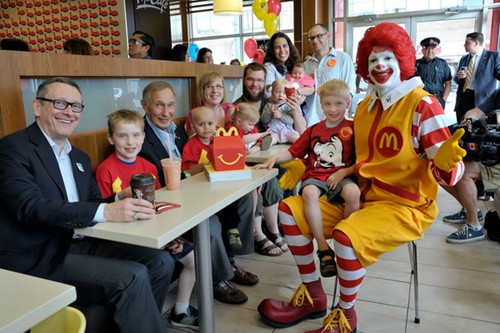 KFC has been present in Vietnam for the last 15 years. Lotteria has been welcomed since 2004. The Vietnamese fast food market has been very bustling with the presence of the big names like Al Fresco, Pizza Hut and Burger King. Meanwhile, only on July 15, did McDonald’s made statement about its plan to come to Vietnam.

What makes McDonald’s keep so cautious with its plan to penetrate the Vietnamese market? And why did the US giant need 15 years long to ponder on whether to come to Vietnam?

The Vietnamese fast food market has been exploited for the last many years already, but the potentials are still great. The high urbanization speed, the increasingly high consumption demand and the improved living standards all have made the fast food market larger.

The income is high enough for consumers to be willing to pay $4-6 for a meal at McDonald’s without hesitance. The only thing McDonald’s has to do is to provide food at the high quality to be acceptable to consumers.

Analysts have commented that once McDonald’s food can conquer the consumers’ hearts in 200 countries all over the world, it would be not an impossible mission for it to satisfy Vietnamese clients.

Analysts believe that the so called “fast food culture” is the reason behind the McDonald’s decision to come to Vietnam later than its rivals.

It took KFC seven years to get Vietnamese familiar to fast food and the western style. During that seven years, KFC had to spend big expenses to lure Vietnamese customers and it had to accept losses.

It took Vietnamese, who have been living in an agriculture based economy, to get used with the meals with meat, fizzy and sugared drinks.

It is the rivals of McDonald’s who have reclaimed the Vietnamese virgin land. And now McDonald’s doesn’t have to spend money and time to get Vietnamese get familiar to the western food. Meanwhile, being the biggest fast food brand in the world, McDonald’s is believed to quickly attract Vietnamese customers, who have been familiar with KFC or Lotteria.

Therefore, McDonald’s, though being the new comer in the market, still has great opportunities to conquer the market.

But McDonald’s won’t go on a rosy road

Though seeing the great potentials for McDonald’s in Vietnam, analysts have warned that the US giant won’t be able to conquer the market in an easy way.

McDonald’s has fallen into disgrace in Asia. A lot of shops have been shut down which has been blamed on the bird flu epidemic in China.

The current circumstances would force McDonald’s to take cautious steps in developing its network in Vietnam. Meanwhile, in order to acquire many loyal customers, McDonald’s would have to find the retail premises on an advantageous position. It’s really not an easy task, because in Vietnam, most of the land plots on the “golden land areas” have been occupied.