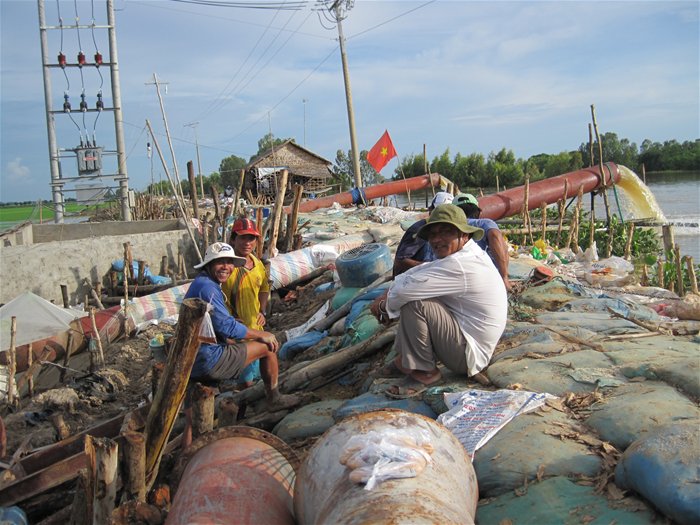 According to Nguyen Huu Thien, an independent expert on hydropower and environment, there are 1,100 square meters of embankment in the Long Xuyen Quadrangle area alone that have three-crop production.

He said the production costs to build embankments are high, and there have been losses of fish resources, alluvium and water pollution due to the increased use of fertilizer and pesticide and to saline intrusion.

“It is estimated that after every 15 years of planting third crops, the area would lose VND47.8 million per hectare. This means that if Mekong Delta’s farmers do three crops a year instead of two, the region will lose about VND7 trillion,” he said. The money from the third crop is modest.

Thien, who conducted a survey in Hong Ngu commune, found that the farmers who plant two crops a year, can earn VND31 million per hectare. Meanwhile, in Thap Muoi district, farmers, with three crops a year, earn VND36 million.

Thien cited some research as saying that after every 20 years, in order to produce one kilo of rice, the required volume of fertilizer will increase by 40 percent.

“This means the production cost will increase and profit will decrease,” he said.

While the production of the third crop does not bring significant profits, it will also worsen saline intrusion in the region.

Five districts in the north of Dong Thap province, covering an area of 35,000 hectares, are inundated in flood season.

Dong Thap can store flood waters for the Mekong Delta in the rainy season and provide water to help ease the salinity in the dry season.

“The solution is much better than asking China to discharge water from its hydropower dam,” he said.

Le Anh Tuan, deputy head of the Institute for Climate Change Studies, said there was still ‘the last opportunity to save the Mekong Delta from saline intrusion in the dry season’ by using Dong Thap Muoi area as the place to store water.