Le Van Lam, 69, in Dong Thap province, is worried as the rice price has unexpectedly fallen by VND300-500 per kilogram and merchants have stopped collecting rice from farmers because of unclear information about the rice export interruption. 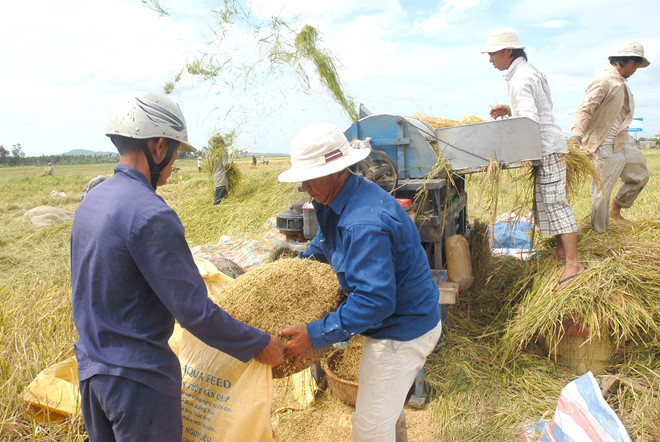 Just one week ago, the rice price reached its peak of VND5,700-6,300 per kilogram after the continued increase for one month. With the price, Dong Thap Muoi’s farmers can make a profit of VND2-3 million for every cong (1,000 square meters).

“If rice is unsalable, we may have to leave 30 hectares of fields uncultivated in the upcoming crop,” he said.

Dong Thap Muoi’s farmers have harvested more than 97 percent of its total cultivation land of 200,000 hectares. The average yield is 7.1 tons per hectare, or 0.1 tons higher than the previous winter-spring crop and the average selling price is VND5,000-6,300 per kilogram.

“If the current situation continues, it is highly possible that 40,000 hectares of summer-autumn crop rice will not find buyers, or the prices will drop,” Nguyen Phuoc Thien, director of the Dong Thap provincial Agriculture Department warned.

Dong Thap is one of the localities with the largest rice cultivation area in Mekong Delta, which produces 3.5 million tons each year.

Meanwhile, in Kien Giang province, farmers have harvested 270,000 hectares of winter-spring crop rice with the yield of 7.2 tons per hectare. They are planning to harvest rice on the remaining 20,000 hectares.

About 1,000 hectares have been affected by drought and saline intrusion. The local authorities said natural calamities have not had a big impact on cultivation.

What worries local farmers now, according to Kien Giang provincial agriculture department official Nguyen Van Tam, is that 376,000 tons of rice to be harvested may go unsold and 290,000 tons of summer-autumn crop rice may not find outlets.

With 1.5 million hectares of winter-spring crop rice, the Mekong Delta can have 5.3-5.5 million tons of rice.

Xuan believes there is no need to worry about food security. Vietnam produces 40-43 million tons of rice each year.