VietNamNet Bridge - More and more milk tea shops have opened recently, even though the selling price is relatively high for the majority of Vietnamese.

VietNamNet Bridge - More and more milk tea shops have opened recently, even though the selling price is relatively high for the majority of Vietnamese. 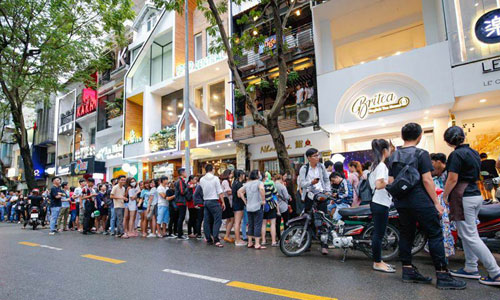 “After lunchtime, a group of office workers often asks me to buy milk tea for them. The shop is on Ngo Duc Ke street, about one kilometer away,” he said, adding that he receives VND20,000 for the delivery service. He receive 4-5 orders every day.

Milk tea first appeared in Vietnam in the early 2000s. However, there were only small privately run shops which prepared milk tea at low prices.

The milk tea movement returned in the last four years with the presence of many international brands such as Dingtea, Chago, Gongcha, Igongcha, Royal Tea and Tea Story.

Besides the franchise shops, a Vietnamese owned company – Golden Gate – which is running 20 restaurants, has also announced its Yu Tang brand. KFC has also launched its own milk tea brand.

Lozi, the developer of a food app, found from a survey that there are 1,500 milk tea shops across the country, and more will join the market in the time to come.

Fifty three percent of surveyed people said they drank milk tea at least one time a week. From early 2017 to the end of June, eight milk tea shops opened in Hanoi every month.

Some ‘milk tea streets’ appeared in Hanoi and HCMC. The business of the shops is so good that the retail premises rent in the areas has been escalating. A report showed that the real estate prices in some milk tea areas increased by 25-71 percent compared with the same period last year.

The land on Ngo Duc Ke street in the central area of HCMC, one of ‘milk tea streets’, is now priced at VND762.4 million per square meter. The other milk tea streets are Phan Xich Long in Phu Nhuan district and Su Van Hanh in district 10.

A representative of Gong Cha in Vietnam said in the past, milk tea was the drink for youth and students, but now, office workers and middle-aged people also order it.

A survey conducted by Q&Me, a market survey firm, showed that people aged 30-39 have the highest level of recognition of milk tea brands.