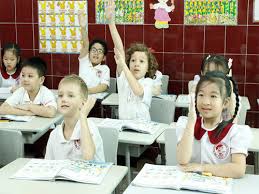 Under the newly issued Decree No 86, Vietnamese students can make up nearly 50 percent of the schools’ total students.

International schools in Vietnam are foreign invested. They provide education services in accordance with foreign or bilingual curricula.

A high school teacher in Hanoi predicted that the newly released decree would lead to a boom of international schools in Vietnam.

“Vietnamese people, with improved income, tend to send their children to international schools which they believe can provide higher-quality education than state-owned schools,” he explained.

Previously, only well-off families could afford their children’s studies at international schools, but now, middle-class people also think of sending children to the schools.

“In the past, it was not easy for parents to enroll their children in international schools because of many reasons, including the regulation on the maximum number of Vietnamese the schools could receive. But with the new decree, the problems have been halved,” he commented.

Miert commented that math and sciences have been the strength of Vietnam, but schools in the world attach importance to developing all students’ abilities and skills.

He went on to say that 50 percent of lessons in bilingual school curricula will be designed by the Ministry of Education and Training of Vietnam, which aims to help Vietnamese students preserve cultural identities.

A report on education released by HSBC showed that in the last two years, more than 110,000 Vietnamese students have been studying in 47 countries. About 90 percent of the students are self-funded. They have to pay tuition of $30-40,000 a year. It is estimated that Vietnamese spend $3 billion a year to obtain international education.

Ministry to revise policies on international schools in Vietnam