Parents whose children are students of private schools have lodged a petition to state management agencies, complaining that the schools were still collecting tuition for the months when students were off and only accessed online learning. 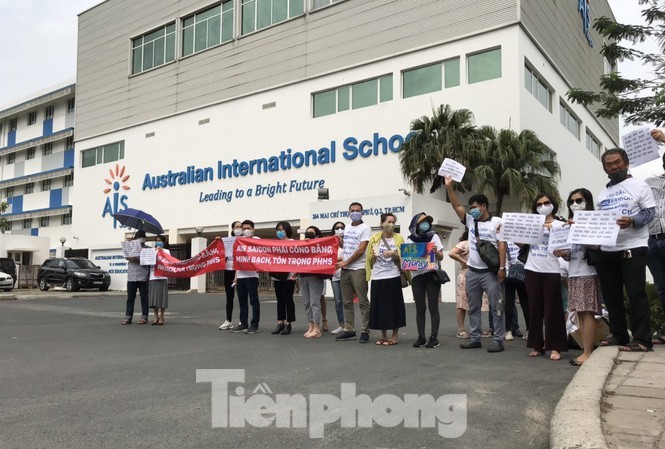 The parents asked for intervention from agencies after they failed to reach a consensus with schools’ board of management.

Many parents gathered in front of VSTAR School on April 28 to protest the tuition collection.

Lao Dong reported that on May 5, hundreds of parents came to the schools, asking for open dialogues about tuition collection during the epidemic.

Most of the schools said they the tuition fees were unchanged. Later, facing strong opposition from parents, many schools accepted to lower the tuition and change some policies. However, parents think the tuition is still overly high.

On May 5, a group of parents from AIS Saigon met with officials from the HCM City Education and Training Department and discussed issues related to tuition policies and the teaching during the lockdown.

According to Pham Duc Cuong, a parent of a fifth grader at AIS Saigon, said parents want to sit down for a dialogue to find solutions.

At first, the parents of the school wanted partial tuition refund. However, later, they decided to ask the school to provide lessons to make up for the days off.

“We pay tuition to send our children to school. Online teaching is helpless for many students,” he said, adding that students need to go to school because they not only need to receive knowledge, but also participate in extracurricular activities.

On the same day, parents gathered in front of some other private schools, including EMASI in district 7 and VAS, to protest the tuition collection policy.

Meanwhile, the HCM City Education and Training Department said the agency is not in the right position to intervene in cases because the tuition payment and collection are implemented on the basis of agreements between parents and schools.

According to Le Hoai Nam, deputy director of the HCM City Education and Training Department, the department sent a document to schools, asking them to talk with parents to find the best solutions on tuition collection to ensure student rights.

“Tuition is collected on the basis of agreement between the two parties. Private schools provide education services and parents pay to use the services. If they are not satisfied about the services, they can move to other schools,” Nam said.