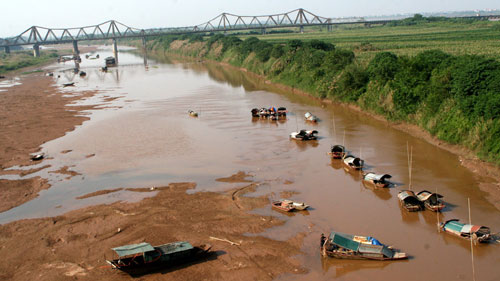 The water level has been decreasing


According to the Central Hydro-meteorological Forecasting Center, since the beginning of November, when hydropower reservoirs stopped discharging water, and started to store water to generate power in the dry season, the water level on Red - Thai Binh river system’s downstream has been falling.

According to Le Viet Son from the Water Resources Planning Institute, since 2001, the Red River water level usually falls in the dry season. The water level in Hanoi in January, February and March was around 0.9 meters lower than the levels recorded in the 1957-2000 period.

There are many reasons for this, including climate change which has altered rainfall and its duration. Also, sand has been exploited, thus lowering the river bed, while the appearance of many hydropower reservoirs in the upper course, which have taken away water and led to the reduction of alluvium, has also caused the problem.

The lowering of the Red River water level has affected six tributaries – Day, Duong, Luoc, Tra Ly, Dao and Ninh Co. Due to the short water supply, the irrigation works located on the basin of the rivers have been left idle or are running at a low capacity.

According to the head of the Hanoi Irrigation Sub-department, Nguyen Vinh Lien, Hanoi has 13 irrigation works along three large rivers of Hong, Da and Day, with 116 pumps which have capacity of 1,000-10,080 cubic meters per hour, which water 66,000 hectares of farmland.

However, in the last few years, eight pump stations could not operate if the Hoa Binh Hydropower Plant was not discharging water to the Red and Day Rivers.

The Phu Sa Pump Station, for example, was designed to operate when the water level is at 5.25 meters. But the average water level for the spring crop of 2017 was 3.38 meters only.

As pump and irrigation stations could not work, 233,400 hectares of farmland in 12 provinces of the Red River Delta are at risk of drought. Also, the low water level causes difficulties for waterway transport, and increases the risks of pollution and saline intrusion.

To ease the water shortage, the Red River Delta has asked EVN to share water by discharging water from hydropower reservoirs. However, Pham Hong Giang, chair of the Association of Large Dams and Water Source Development, said the solution is unsustainable.
RELATED NEWS