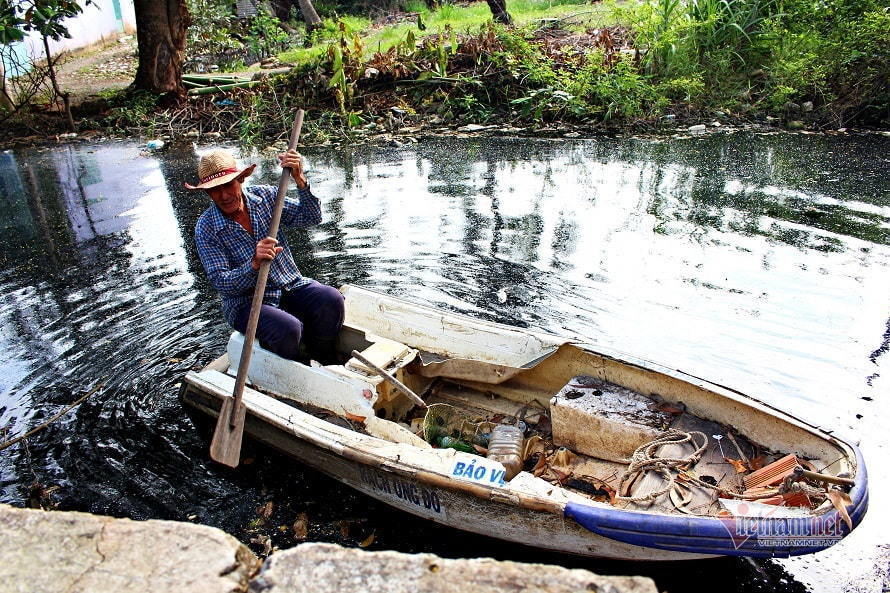 Hurrying to put on his boots, Ho Chi Cuong from Binh Chanh commune in Binh Chanh district in HCM City drives his old motorbike to Ong Do Canal every day, where he and his grandchild clean up and clear the water flow.

Cuong said Ong Do Canal became seriously polluted in 2018. Domestic waste, together with thick hyacinth, blocked the flow. As the water got stuck, the waste decomposed, creating thick layers floating on the water surface and giving a bad odor.

The Binh Chanh commune authorities then encouraged institutions and individuals to help upgrade the canal. Cuong asked volunteers to take part in collecting garbage and cleaning the canal.

But the canal had been cleaned for only a short time when people again started throwing waste into it. The flow was once again blocked and the water turned black again.

“I saw the canal becoming seriously polluted and I decided that my grandchild and I will collect trash on a voluntary basis,” he said.

The two of them go to the canal every morning, where they steep themselves in water to pick up garbage.

“At first, I did not have any tool to pick up garbage. I just put myself in water and picked up every plastic bag and plastic box. After each cleaning, I had to give up by clothes, because they could not be cleaned. My skin became ulcerated because of the dirty water,” he recalled.

However, as he wants to set an example for those who drop litter, he vows not to give up the unpaid job. Every morning, he goes to the canal with his grandchild and uses a fishing net to collect garbage from the canal.

“Many people say I am paid for the waste collection, because no one would be foolish enough to do this for free. Others say I have too much free time, so I do something that will never bring results,” he said.

However, he doesn’t care about the comments, because he is doing good work for society.

Feeling pity for the man, the local authorities gave him a junk made from an old boat. Thanks to the boat, he doesn’t have to give up clothes every time after working and can collect waste more effectively.

“I row the junk, while my grandchild picks up waste. If we see too much waste in the same place, we use a racquet to collect it and put into a bag,” he said.