Salt-water attacks Can Tho for the first time

VietNamNet Bridge - Nearly 100 km away from estuary, Can Tho – the largest city in the Mekong Delta – is still affected by salty water as saline intrusion is the worst in decades in Vietnam’s southwestern region.

VietNamNet Bridge - Nearly 100 km away from estuary, Can Tho – the largest city in the Mekong Delta – is still affected by salty water as saline intrusion is the worst in decades in Vietnam’s southwestern region. 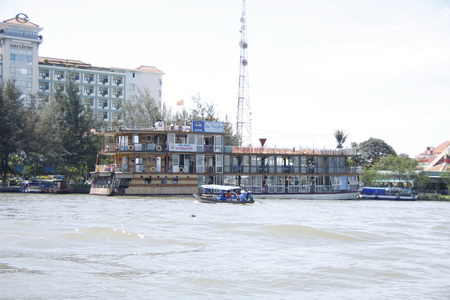 The Office for Climate Change Affairs has reported that the salinity in the Hau River in Cai Cui port (Cai Rang District, Can Tho City), on March 11 was measured at above 2,000 mg per liter (2‰).Salinity is reducing but it is forecast to increase again in one month.

In the southwestern region, only Dong Thap province, in the upstream Tien River and Hau rivers, has not been attacked by saltwater.

The Can Tho Water Supply Company has three wanter plants, with a total capacity of over 82,000 m3 per day. All of them are located in the dangerous zone in this historic drought and salinity.

These plants have stored fesh water in all tanks, which is enough for their operation for several hours while waiting for salinity reduction.

"Can Tho should consider the solution of storage of surface and underground water and filtering saltwater into fresh water like the way Singapore does," said Ky Quang Vinh - Chief of the Can Tho Office for Climate Change Affairs.

Dr. Le Anh Tuan, Deputy Director of the Institute for Mekong Delta Climate Change Research, Can Tho had never been intruded by saltwater. If drought prolongs, saltwater intrusion will be more serious.

Tuan said the city should have effective measures to switch to water-saving crops, with supporting policies to local farmers in the transition period.

Experts said people in the southwestern region are accustomed to rely on fresh floods to maintain their livelihood while the “salty flood” is extremely dangerous because it destroys productivity and quality of farm products, especially rice, threatening national food security. The area that is covered by saltwater will be still salty ten years later.

So far eight provinces in the Mekong Delta have declared to be facing a natural disaster, with hundreds of thousands of hectares of rice, fruit, vegetables, and aquaculture are affected.

Meanwhile, the Dong Tam BOO water plant in Tien Giang province may have to stop operating in the next few days because of the high salinity in the Tien River, which is now 4-5g/l, compared to the standard level of 0.3g/l.

This plant supplies 70,000 m3 of water for the city of My Tho and Go Cong district. Tien Giang is preparing to drill wells to have underground water to serve its people.