Vietnam became a member of the Convention on Wetlands, known as the Ramsar Convention, in 1989. So far, nine wetlands in the country have been recognised as Ramsar sites – wetlands of international importance. 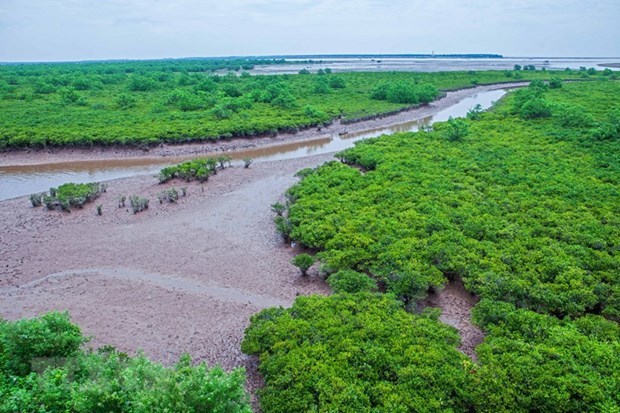 Xuan Thuy National Park in Xuan Thuy district, the northern province of Nam Dinh. In 1989, it was listed as the 50th Ramsar site in the world and the first in Vietnam and Southeast Asia

The Ramsar Convention, signed in Iran’s Ramsar city in 1971, is an international treaty that provides a framework for the conservation and sound use of wetlands and their resources. It aims to stem the increasing encroachment on and loss of wetlands at present as well as in the future.

Assessed as a country with diverse wetland ecosystems and 25 areas able to meet the criteria of wetlands of international importance under the Ramsar Convention, Vietnam ratified and became the 50th signatory to this convention in 1989. It was also the first in Southeast Asia to do so.

In 1989, the alluvial ground in the south of the Red River’s mouth in Xuan Thuy district, the northern province of Nam Dinh, was listed as the 50th Ramsar site in the world and the first in Vietnam and Southeast Asia.

Xuan Thuy National Park boasts 14 types of biotopes, both natural and artificial. The biotopes with the highest biodiversity value are alluvial deposits and natural submerged forests.

Thanks to the diversity and relatively intact state of biotopes here, the park is an important stopover and wintering habitat for migratory water birds.

Surveys in 1988 and 1994 spotted more than 20,000 water birds in the area. Among them, there were eight species threatened or near-threatened at a global level, including the black-faced spoonbill, Chinese egret, spotted greenshank, Saunders's gull, spot-billed pelican, spoon-billed sandpiper, painted stork, and Asian dowitcher.

Notably, Xuan Thuy National Park is home to the largest population of black-faced spoonbills in Vietnam.

In 2005, Bau Sau Wetlands and Seasonal Floodplains, part of Cat Tien National Park in the southern province of Dong Nai, was designated as the 1,499th Ramsar site in the world and the second in Vietnam.

Bau Sau is located in an endemic bird area in Vietnam’s southern lowlands. It provides a habitat for tens of bird species closely linked with wetlands, including both endemic and migratory ones, with such rare species as the woolly-necked stork, peacock, lesser adjutant, white-shouldered ibis, and white-winged duck.

Other rare animal species here include Asian elephant, sun bear, Asian black bear and tiger. Bau Sau is also home to the Siamese crocodile, which is listed as critically endangered in Vietnam’s Red Data Book (2007) and on the International Union for Conservation of Nature (IUCN) Red List (2012).

Ba Be National Park in the northern mountainous province of Bac Kan became the 1,938th Ramsar site in the world and the third in Vietnam in 2011.

It is assessed as a unique ecosystem with Ba Be Lake at its centre, a large natural lake that is situated at an altitude of 178 metres above sea level.

The park boasts diverse freshwater biotopes, including stagnant ponds and swamps. It holds great significance in the country's protected area system because it is the only site that has a natural lake surrounded by a mountainous karst ecosystem.

Ba Be Lake habours more than 100 freshwater fish species, many animals threatened at different levels like the Owston's palm civet and François' langur, and over 230 bird species, including the globally endangered white-eared night heron and the near-threatened great hornbill and grey-headed fish eagle.

Tram Chim National Park in the southern province of Dong Thap was named the 2,000th Ramsar site in the world and the fourth in Vietnam in 2012.

The park, mainly covered by seasonally flooded grasslands and cajuput forests, is home to hundreds of bird, plant and fish species. Large populations of water birds are also present here, especially those migrating from the north to avoid the cold winter.

The sarus crane, the symbolic species of Tram Chim National Park, is listed as vulnerable at global and national levels.

Also in 2012, Mui Ca Mau (Ca Mau Cape) National Park, in the southernmost province of Ca Mau, entered the list of wetlands of international importance, becoming the 2,088th of its kind in the world and the fifth in Vietnam.

It has a large area of intertidal mudflats and submerged forests. This is the only place in Vietnam that has three sides bordering the sea and where two different tidal regimes interact, which contributes to building new mudflats and creating favourable habitats for many species. The site also provides important stopover and wintering habitats for a large number of water birds.

In 2010, the IUCN recorded many globally endangered species here, including primates, birds, otters, reptiles and fishes.

Con Dao National Park in the southern province of Ba Ria-Vung Tau became the 2,203rd Ramsar site in the world and the sixth in Vietnam in 2013.

There, more than 1,000 vascular plant species and a large number of birds, mammals, reptiles and amphibians. Many bird species in Con Dao cannot be found anywhere else in Vietnam, such as the red-billed tropicbird, masked booby and pied imperial pigeon.

Surveys by the Nha Trang Institute of Oceanography found there are over 1,300 maritime fauna and flora species, including 44 in Vietnam’s Red Data Book, in the park. Particularly, Con Dao is home to a small population of dugongs which are vulnerable to extinction around the world.

Lang Sen Wetland Reserve, part of Dong Thap Muoi (the Plain of Reeds) in the Mekong Delta, was designated as the seventh Ramsar site in Vietnam in 2015.

Surveys show that Lang Sen is home to 156 plant species and 149 vertebrates, 13 of which are named in Vietnam’s Red Data Book.

The eighth Ramsar site in Vietnam is U Minh Thuong National Park in the Mekong Delta province of Kien Giang, which gained the recognition in 2016.

It is one of the two most important peatland areas in the country, the other is U Minh Ha.

The ecosystem of cajuput forests on peatland holds special importance as it nurtures hundreds of kinds of wild animals, including birds, mammals, reptiles, amphibians, fishes, insects and many aquatic species.

There are 72 rare animal and plant species in U Minh Thuong listed in Vietnam’s Red Data Book and the IUCN Red List.

Van Long Wetland Nature Reserve in the northern province of Ninh Binh earned the Ramsar site status in 2018, the 2,360th of its kind in the world and the ninth in Vietnam.

The site is one of the few intact lowland inland wetlands remaining in the Red River Delta. It is centred on a block of limestone karst outcrops that rise abruptly from the flat coastal plains of northern Vietnam.

The freshwater lake, marshes and swamps that surround the karst structures, together with subterranean hydrological systems, form a wetland complex that is very rare in the Indochinese Peninsula.

The limestone mounts are famous for providing a home for the critically endangered Delacour’s langur, one of the world’s 25 most endangered primates. The site is home to more than half of the global population and is the only place where the species can be observed in the wild.

The park is also an important refuge and breeding ground for a number of aquatic species, and a staging site for water birds. It provides important ecosystem services for the surrounding communities, including its aquatic and agricultural resources, water regulation and scenic beauty for recreation and ecotourism.