Ha Long City residents are concerned as rapid urbanization in recent years has affected mangrove forests in the city.

Mangrove forests are a solid green wall against storms and tsunamis. They also play an important role in coping with climate change, preventing saltwater intrusion and cleaning the coastal environment. 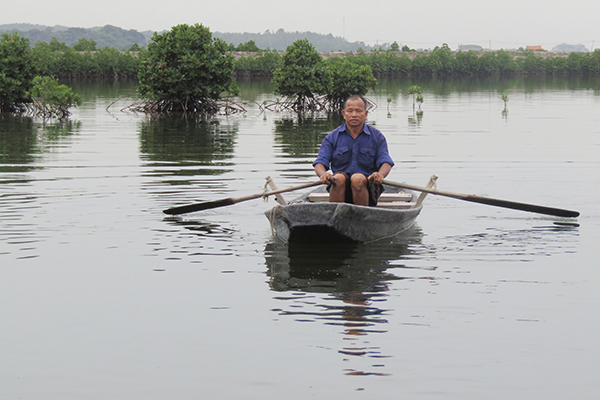 Mangroves are an ideal environment for shrimp, fish, and mollusks to live, creating a diversity of aquatic species. Thousands of households along the coast of Quang Ninh are indebted to these forests for giving them produce to earn a living.

But instead of being protected, mangroves have been cleared to make room for sea encroachment projects. As a result, the forests have nearly disappeared in many places.

The Ha Long heritage area has seen a ‘sea invasion’. Millions of cubic meters of soil have been poured into the sea. The entire coastal mangrove areas in Ha Khau, Dai Yen and Tuan Chau wards have disappeared completely, making room for projects pending for tens of years.

Kim Thai, a journalist who spent years to protect the environment with a series of articles and reportage about mangroves, said that Cua Luc waters which cover the wards of Cao Xanh, Yet Kieu and Ha Khanh contained vast mangrove forests, where people could catch tens of kilograms of shellfish, and hundreds of kilograms of fish and shrimp. This brought an income of several millions of dong a day.

“But the peaceful and rich green color has disappeared. Now it is a coal export port with tens of thousands of cubic meters of soil and stone,” Thai said.

“Mangroves also once existed along the beach for kilometers in Ha Long City. But they have disappeared. A series of sea encroachment projects have been implemented to expand urban areas, eliminating all the mangroves in the wards of Cao Xanh, Hong Hai, Hoang Ha, Tuan Chau and Bai Chay,” she said.

“In the wards of Dai Yen, Viet Hung and Hung Thang, the forests have been partially cleared,” she added.

Many forests, one after another, have been cleared to make room for investment projects. The mangrove forest, one of the rare forests still existing in Dai Yen, where people have been earning their living for many years, will be taken back to make room for a huge project.

The last mangrove forests continue to be cleared, and no one is stopping the devastation.

Hồ Ra Ơi, a Vân Kiều ethnic minority man in the Central Highlands province of Đắk Krông, has his own unique way of protecting the forest.