Red River, considered a cultural space of Hanoi, is filled with grass and plants, and is polluted and dirty.

Prof Dr Pham Hong Giang, former Deputy Minister of Agriculture and Rural Development, expressed his concern that the Red River river bed is getting smaller, while the water level is getting lower. 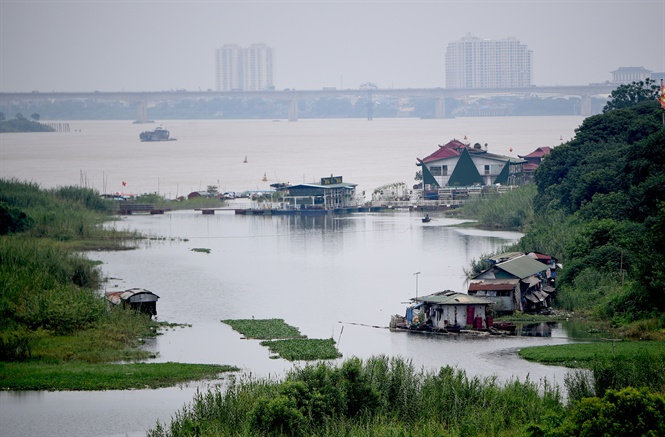 Meanwhile, in Hanoi, houses, in close proximity to each other, turn their back to the river and waste water goes to the river, making it terribly polluted.

Giang noted that the Red River has seen big changes over the last 15 years, especially the changes to the flow. The water level has gone down sharply in dry season.

According to water resource scientists, this is blamed on the decrease in alluvium because of reservoirs in the upper course. However, the major problem is uncontrolled sand exploitation.

The Water Resources Institute has proposed building weirs on Red River valley, including on the section of the river going through Hanoi. Giang said the solution is good, effective and feasible.

To date, the Red River has been developing in a natural way. When farmers need water to irrigate fields, they would ask the Electricity of Vietnam (EVN) to discharge more water from reservoirs in the upper course, which would provide more water to the lower course.

However, EVN doesn’t want to do this.

Each year, the water discharge spells take 5 billion cubic meters of water away from hydropower reservoirs. Meanwhile, only 20 percent of water can be used, while the remaining goes to the sea.

The time when farmers need water to irrigate fields falls in the first months of the year, which at the time when EVN’s hydropower plants need to store water to prepare for electricity generation in anticipation of high electricity demand in summer.

The water discharge only serves rice farming. In the context of climate change, Vietnam is restructuring agricultural production and farmers have strengthened cultivation of other crops and begun developing agriculture.

The weirs, once built, will not only help the irrigation system to take water from the Red River, but also help share water with tributaries such as Nhue and Day Rivers and help settle pollution.

He thinks that in the immediate time, when the financial capability is limited, two weirs in Long Tuu (Duong River) and Xuan Quan (Red River) should be built first.

The Hanoi People's Committee will hold an auction between now and September for the sand mining rights for the riverbed of the Red River in the city's Long Bien District.

Deborah Stone and Nick Dalton, co-authors of the book The World’s Great River Journeys, have named Vietnam's Red River among the eight unmissable river trips worldwide during a discussion with the UK's Daily Mail newspaper.