Seaport industry’s growth rate twice as much as global rate 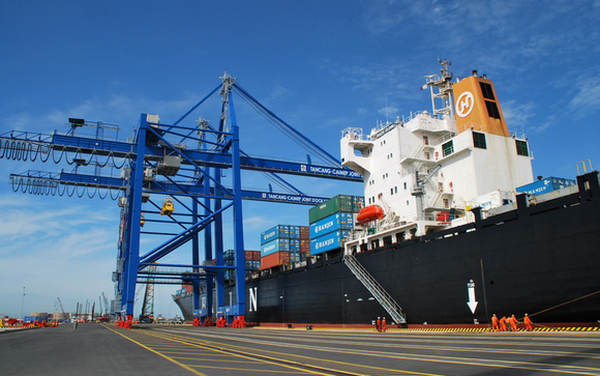 Fred Burke from Baker & McKenzie Law Firm in Vietnam said the country is a model for international trade as it started in 1990 with no transactions to become one of the world’s leading exporters in garments and footwear, rice, coffee, spices, wooden furniture, and electronics and software.

The global economic integration has brought business opportunities to all fields in the value chain, from production and business to distribution and trade. The seaport and transportation sector depends heavily on import/exports.

According to FPT Securities, Vietnam’s total volume of goods going through ports has been rising rapidly as exports have increased since 2007, when Vietnam joined WTO.

The volume of container goods going through ports in Vietnam saw CAGR of 11.8 percent in 2010-2015, higher than the 5.1 percent level globally. This is attributed to FIEs’ high imports of input materials and exports of finished products.

According to GDC, FIE export turnover amounts to 60-70 percent of Vietnam’s total import/export turnover. In 2016, enterprises exported $69 billion worth of products, while the import turnover was $60.6 billion.

A report from the Vietnam Seaport Association showed that the volume of container goods going through the ports throughout the country in 2015 was 11,222 thousands of TEU, which meant an increase of 12.2 percent over the year before and CAGR of 17.3 percent in 2000-2015.

FPT Securities believes that the gap in the growth rates by the ports would be wider in the future. The ports in HCMC (Cat Lai, Sai Gon and Hiep Phuoc) will have few more opportunities for development, while the deep-water Cai Mep – Thi Vai complex will benefit thanks to the increase in ship size.

The ports in Da Nang will also benefit from FDI flow to Vietnam. However, after 2018, the service fee competition in the area will worsen once Tien Sa Port (second phase) becomes operational, thus increasing supply. Meanwhile, the deep-water Lien Chieu Port is scheduled to be put into operation by 2023.

The ports in Hai Phong City area are used expected to thrive thanks to the strategic position (it is near Northeast Asian countries) and improved infrastructure.