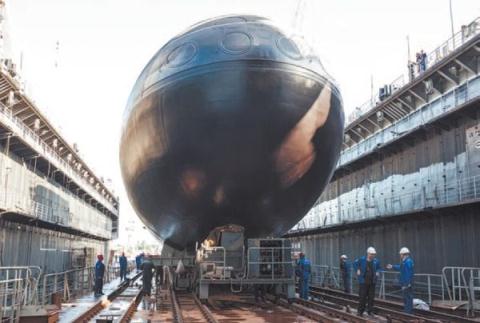 “Vietnam is quite capable of building military subs, though, like any other country, we will have to experience big difficulties,” said Hoang Hung, deputy chair and secretary general of the Vietnam Shipbuilding Science Association.

“It is wrong to say Vietnam should not ‘dream’ of building military subs,” he commented.

“In the past, Vietnamese once thought they would never be able to build hydropower plants. However, after building the Hoa Binh Hydropower Plant, we could build Song Da Plant which is a big one in the world,” he said, adding that Vietnam should not shrink back from difficulties, because even Russia, Poland and Germany also failed before their successes.

“No one could imagine that Vietnam would be able to make a drilling rig. Meanwhile, PV Shipyard has recently launched Tam Dao 05 jack-up with the total tonnage of 18,000 tons,” he said.

When asked how Vietnam can build military subs with the current poor supporting industries, Hung said he was sure that ‘no one country in the world can go from A to Z when building ships’.

The shipbuilding industry has relations with a lot of other industries, such as metallurgy and manufacturing, while the components on one ship could be assembled from products from many different factories.

“You don’t need to wait until you have all machines and equipment to build military ships. You can even design your subs and then outsource to foreign firms,” he said.

Regarding the quality of Vietnamese technicians, Hung believes that “Vietnamese specialists are sometimes better than foreign ones who have the same teachers”.

“The problem lies in the management,” he commented.

Hung went on to say that building military subs itself is a must for Vietnam, though it is a difficult task.

“We have a long coastline of 3,000 kilometers and we have territorial waters. If we only have normal ships, we cannot know if other countries illegally run their subs under our sea,” he said.

“In principle, subs need to be self-designed ones. This is really bad if we use the subs we buy, because the manufacturers know everything about the ships,” he explains. “Therefore, we need to have the subs to be built by ourselves, though it will take a long time."

The shipbuilding science association is preparing to organize a workshop on sub building and materials.