Should water be transferred from east to west to save the Mekong Delta?

Experts believe that it is necessary to think of measures to lead water to the Mekong Delta through a transmission network to save the area from severe drought and saline intrusion.

In 2016, saltwater for the first time reached Cai Cui Port in Can Tho, just 100 kilometers from Tran De beach in Soc Trang, and reached administrative centers in the provinces of Ben Tre and Vinh Long. 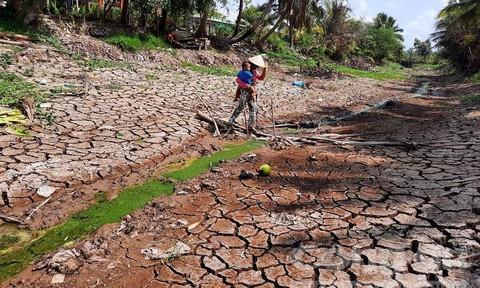 But the situation has been more serious this year. Saltwater has affected 10 out of 13 provinces in Mekong Delta. Some provinces have declared an emergency because of the saltwater attacks.

The Ministry of Agriculture and Rural Development (MARD) predicted that 130,000 hectares of fruit trees will be affected and 150,000 households will lack water for daily use.

Lacking freshwater, people have to either wait for freshwater relief aid or buy water at exorbitantly high prices. However, experts say the measures won’t be able to settle the problem as the saline intrusion level has exceeded the record level of 2016.

According to Vu Trong Hong, former Deputy Minister of Irrigation, now MARD, this year’s drought season has not reached its peak, and building more seawater prevention sluices is an expensive but ineffective measure.

Meanwhile, the supply of fresh water from the upstream to the branches of Mekong River has been interrupted due to the upstream hydropower dams.

The freshwater supply in the Mekong Delta has to rely on natural rainwater. More than ever, the Delta needs a true freshening program that allows people to have access to water for daily life and irrigation.

“Under the long-term freshening program, it is necessary to think of transmitting water from the east to the west through transmission lines, and building standardized water reservoirs,” Hong said.

According to Hong, a water freshening program was drawn up in 1996. However, the implementation was delayed as some experts believed that there was no need for it and that farmers should irrigate crops with underground water.

As farmers used too much water, the freshwater layer has been lost. Meanwhile, many mangroves forests have been cleared away, which has allowed saltwater to penetrate deep into the mainland.

Hong thinks water containing areas should not be removed. In the past, Mekong Delta had Dong Thap Muoi and Long Xuyen Quadrilateral areas to contain water and prevent saltwater intrusion.

In the current context of freshwater shortage, Hong has urged acceleration of the water freshening program.

“While waiting for the long-term freshening program to be implemented, it is necessary to bring water to people through temporary transmission works,” he said, stressing that support in money and water shortage relief are not enough.

Prime Minister Nguyen Xuan Phuc recently had a working session with localities declaring an emergency because of drought and saline intrusion in Mekong Delta, including Long An, Tien Giang, Ben Tre, Kien Giang and Ca Mau.