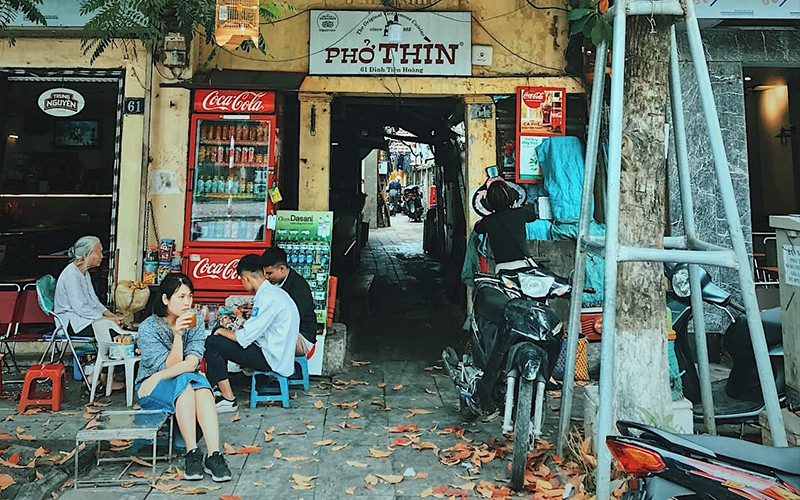 There is an eatery serving ‘bun oc’ (snail noodle) in an alley in Hang Be Street. The alley is so narrow that it doesn’t provide enough space for two bikes to pass from opposite direction. The eatery doesn’t even have a signboard. After travelling more than 30 metres in the dim light of the alley, foodies will reach the eatery, which is a 20 sq.m house with several plastic table chair sets.

The eatery is the home of the owner. Foodies must book in advance before they come, and the owner always limits the number of guests per day! If there are enough customers, the owner will invite guests to come by the next day, rather than accept more slots. A style no different from high-end restaurants!

In recent years, many cooks have modified snail noodle by adding pork sausage and beef into it. However, the owner of the eatery on Hang Be Street remains loyal to the traditional taste as a bowl of snail noodle simply includes boiled snails, noodles, and broth.

Although the eatery has never been mentioned on any tourist map, it is the favourite address for those who wants to sample the authentic savour of Hanoi’s snail noodles.

Only five-minute walk from Hang Be Street is an eatery serving genuine Hanoi ‘bun rieu’ (crab noodle). Located in a tiny alley on the opposite site of the Ta Hien – Luong Ngoc Quyen crossroad, the eatery has no signboard. Even those who are not a fan of spring rolls can easily change their mind after the first bite at the eatery, which is located in a tiny alley on the opposite site of the Ta Hien – Luong Ngoc Quyen crossroad (Photo: Ngoc Anh)

The eatery has only two staff, the cook is an old woman, and the waiter is her husband. On offer are two dishes: ‘bun rieu’ and spring rolls. Even those who are not a fan of spring rolls can easily change their mind after the first bite at the eatery.

It would be an omission to talk about Hanoi without mentioning ‘pho’. Pho Thin might be one of the most famous places to taste Hanoi’s ‘pho’. The eatery was opened by Bui Chi Thin more than sixty years ago. Now, his grandson is the cook.

Despite the passage of time, Pho Thin remains faithful to the traditional Hanoian methods of cooking ‘pho’. The menu includes beef ‘pho’. The broth is clear and the beef seems to be softer than other places because the chef tenderly pounds the meat on the cutting board with the spine of his knife before cooking.

Located in an alley looking at Hoan Kiem Lake, Pho Thin allows gourmets to enjoy ‘pho’ while admiring the lake – an iconic location of Hanoi. Many Hanoians who live and work far from home say they absolutely must go to Pho Thin to have a bowl of ‘pho’ whenever they return to Hanoi, claiming that this is the only way to have the true feeling of being home. 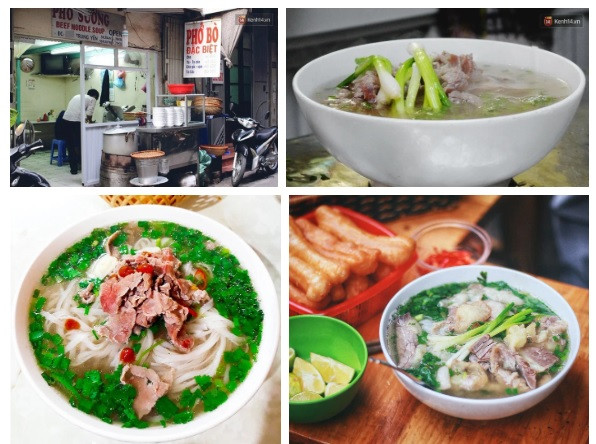 Pho Suong is also a favourite ‘pho’ brand for many generations of Hanoians. (Photo: Hanh Hanh)

Pho Suong is also a favourite ‘pho’ brand for many generations of Hanoians. Pho Suong opened more than 30 years ago, now it is located in Trung Yen Lane, a small alley on Dinh Liet Street.

Also located in sneaky locations are Pho Oanh in Tho Xuong Alley, Ly Quoc Su Street, and an unnamed ‘pho’ eatery in a narrow lane off Hang Trong Street.

There are alleys in Hanoi Old Quarter that are heaven for food lovers. Phat Loc Alley offers a wide range of options for lunch, including ‘bun cha’ (noodle with grilled pork), snail noodle, and ‘bun dau mam tom’ (noodle with fried tofu and shrimp paste).

Hanoi is not a city where tourists fall in love at the first sight. The beauty of the city is not merely boasted through its appearance. It requires tourists to take their time to explore the charm of Hanoi’s beauty. The same is true of the cuisine.

Sometimes, the best of Hanoi cuisine is not on offer at big restaurants but is hidden in small alleys, where the traditional cooking style and authentic taste of Hanoi is still preserved and highly appreciated.