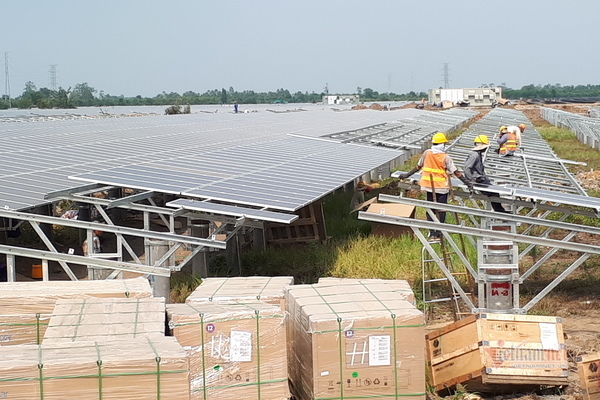 According to  the Electricity of Vietnam (EVN), the total solar capacity installed as of December 31, 2020 had reached 19,400 MWp, including 9,300 MWp rooftop solar power, or 16,500 MW, accounting for 25 percent of total installed capacity of the national electricity system.

Many solar power plants became operational within a short time, causing an overload to the transmission system. As a result, power plants have had to cut their capacity.

Amid the Covid-19 pandemic, the electricity demand has decreased. A problem, which was not seen before, has arisen: electricity is in excess at some moments of the day, from 10 am to 2 pm, especially on weekends and holidays. This gives another reason for power plants to reduce their capacity.

A solar power developer has asked to the National Assembly, the government, the Ministry of Industry and Trade (MOIT) and EVN for help because his project cut capacity, up to 50 percent.

However, an analyst commented that 9.35 cent per kwh is a good price for investors. In principle, investors consider the whole life cycle of projects, not just several years of capacity cuts. The 9.35 cent per kwh price is the Chinese policy in 2019, which led to a decrease in solar panel prices, thus reducing the investment rate in solar power.

Previously, investors did not anticipate the scenario of having to cut capacity. But now, they have to consider this problem and decide if the projects are feasible.

He said the drop in demand caused by Covid-19 is occurring all over the globe. Only when the world recovers from the pandemic will the demand for electricity increase again.

In the future, the electricity demand will keep increasing as Vietnam still can attract investment.

In addition to the concern of having to cut capacity, some solar power projects still cannot fix selling prices.

The projects have the parts of capacity put into commercial operation prior to January 1, 2021, but their investment decisions were made after November 23, 2019. They are not subject to the FIT of 7.09 cent per kwh (VND1,600) in accordance with Decision 13.

As a result, EVN and investors still cannot sign power purchase agreements (PPA) and investors have not been paid for the electricity they have provided to the national grid.

The Decision 13 on the mechanism to encourage solar power development is no longer valid. The Ministry of Investment and Trade (MOIT) has asked the Prime Minister to allow projects to apply the 7.09 cent per kwh price to ensure investors’ financial plans.

Even EVN, a state-owned enterprise, has one Phuoc Thai 1 solar power plant. The project became commercially operational on July 9, 2020 with the capacity of 42 MW, while the designed capacity is 50 MWp.

However, the Ninh Thuan provincial People’s Committee, argued that Phuoc Thai 1, a dependent unit belonging to EVN, doesn’t have a PPA with EVN, so it cannot enjoy the 9.35 cent per kwh price. Therefore, the project must not be counted in the total accumulative capacity of 2,000 MW assigned by the government in Resolution 15.

MOIT, inclining to Ninh Thuan’s opinion, proposed that the Prime Minister not allow the project to enjoy the price of 9.35 cent per kwh.

An official told VietNamNet that EVN’s project is not subject to the 9.35 cent or the 7.09 cent per kwh.

Meanwhile, EVN disagrees with Ninh Thuan’s agreement. In its documents to agencies, EVN said that the 9.35 cent per kwh policy is applied to solar power projects belonging to the 2,000 MW accumulative capacity plan with the COD (commercial operation date) certificate in 2020, no matter whether projects are invested by EVN or non-EVN units.

An investor commented that the unstable and unpredictable electricity pricing policy on solar power development is one of the reasons why power projects only attract Chinese investors, while it is difficult to lure investors from Europe and the US. Chinese investors are accustomed to doing it this way and accept risks.