Special 'family' lives in University of Science and Technology’s dorm

Before the opening of the new academic year, Quan’s parents decided that Quan would live in the dormitory at the school. A family member would be in charge of taking him to school. 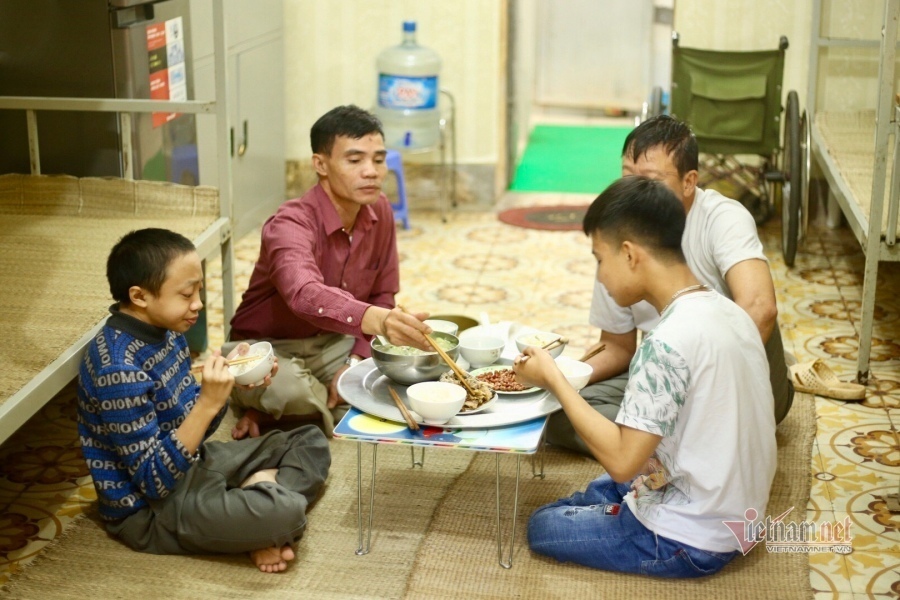 Nguyen Tat May, the father of Minh, after listening Quan’s story, also decided to live together with his son in the dormitory.

The four of them have moved to a 25 square meter room in the dormitory and begun living together as a family.

The room is on the first floor with specific entranceway for wheelchairs. All the equipment in the room is designed in a way to make it easy for them to use.

Every day, after taking the sons to school, the two fathers return and prepare meals. They cook and eat together.

They are happy living together. “From now on, Minh has one more friend to share joys and sorrows in his life,” said May, his father.

Minh, who was born without legs, has become well known for his beautiful friendship with Ngo Minh Hieu, the friend who carried Minh on his back to school every day for 10 years.

Hieu got a very high score on the high school exam finals and successfully enrolled in Thai Binh Medical University.

In Hanoi, Minh is still unfamiliar with streets and still doesn’t have close friends. He is taken to school every day by his father.

May, the father, still doesn’t have a plan for the future. In the immediate time, he will stay in the dormitory, prepare meals, and meet and see off his son.

It is difficult for him to carry his son, who weighs 40 kilograms, upstairs after the accident. However, May is happy as he can be close to his son.

May said it was ‘predestined’ for his son to meet Quan and his family.

Quan is weaker than Minh. He cannot walk. Even with crutches, he can walk only a few steps. Because of the serious disease, Quan sometimes suffers fractures of his legs and hands.

The parents are worried the most about the higher cost of living in Hanoi. They plan to take some jobs to earn money to cover their basic needs and to fund their sons’ study.

Nguyen Thi Ngoc, a student at Hanoi University of Science and Technology and a member of the Green Eye Group in the Youth for Environment Project, has proposed that customers should be allowed to take their used milk cartons or bottles