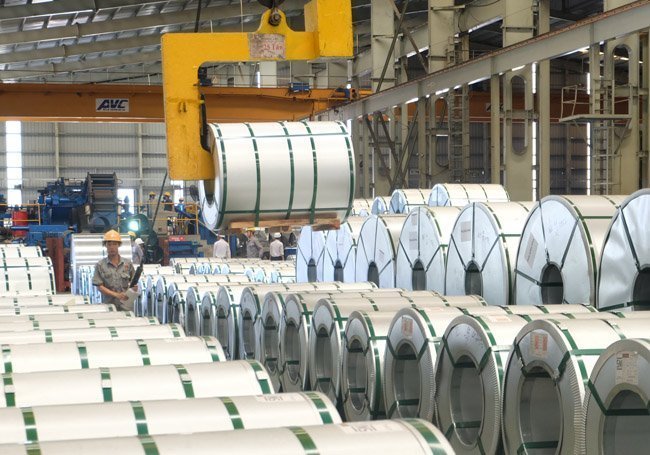 Pomina Steel (POM) saw net revenue increasing sharply by 52 percent to VND3.596 trillion in Q2, despite the scandal in which cocaine was found in the import consignments of scrap steel which docked at the Ba Ria-Vung Tau Port on July 24.

Though sales and management costs increased by 41 percent and 19 percent, respectively, POM still reported combined profit of VND164 billion in the second quarter, up by 175 percent compared with the same period last year.

With the Q2 revenue estimated to reach VND4.7 trillion, up by 60 percent, SMC’s total revenue in H1 is VND8 trillion, while the post-tax profit is VND159 billion, up by 5 percent.

As for Hoa Phat, a big player in the industry, according to HCMC Securities (HSC), the H1 profit us estimated to increase by 28.7 percent compared with the same period last year.

HSC believes that the net revenue of Hoa Pht in H1 may be up to VND27.14 trillion, a sharp increase of 30 percent, thanks to the higher average selling prices, plus the sales increase. This allowed it get huge post-tax profit of VND4.473 trillion in the first half of the year.

Meanwhile, Vietnam-Italy Steel (VIS) caught the investors’ attention when reporting a big loss of VND68 billion in Q2, the biggest quarterly loss VIS has incurred since it began listing shares on the bourse.

Dana Y Steel (DNY) also reported losses, but this was not a surprise. The company, which was found involved in a scandal that caused pollution, was forced to suspend production.

DNY took a loss of VND17.5 billion in the first quarter, but made a profit of VND6.1 billion in the second quarter, thanks to which the loss in H1 reduced to VND11.4 billion.

Analysts said the challenges for steel mills in the second half of the year lie in the supply increase which would lead to the selling price decreases, while the steel demand will not increase significantly because the real estate market’s growth has been slowing down.

However, analysts believe that the impact protectionism has on Vietnam will not be high, because steel exports just account for 10 percent of total steel output.