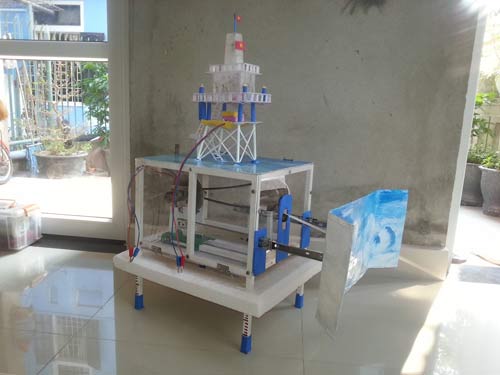 The students, living in a coastal commune, play on the beach every day and believe that the energy source from the sea is unlimited.


They discovered that sea waves carry different types of energy, including mechanical energy, kinetic energy from the water flow and potential energy created by the difference in sea water level in choppy conditions.

Scientists have found several solutions to receive energy from sea waves, but the efficiency is lower than expected.

The students also read about many scientific research focused on exploiting potential energy and in order to obtain a high level of energy, the exploitation must be implemented on a large scale.

Doan Trong Thanh said Vietnam has a long coastline, but the height of sea waves is not as high as other countries; therefore, it will be ineffective to exploit potential energy from the difference in water levels. That is why they decided to exploit the kinetic energy of sea waves and turn it into electricity.

The advantage of the students’ system is that if operators want to strengthen the exploitation scale when there are strong waves, they only need to increase the area of the waves receiving panels horizontally, or use the actuator at a higher rate, or increase the weight of the flywheel. There is no need to increase the scale of the entire system.

Gear 1 will transmit motion into Gear 2. Since Gear 1 has bigger radius than Gear 2, Gear 2 will make more revolutions. Gear 2 will transmit motion to electricity generators. The flywheel attached to Gear 2 will help the electricity generator rotate longer.  The electric current created from the generator will be put into a charging circuit for charging the battery. Power from the battery will be used to provide power to the external load.

The system can be used for electrical lights on coastal roads or provide electricity to remote areas which the national grid still cannot reach.

How much do scientists receive for their inventions?