Travel firms cry for action to rescue rivers and canals

VietNamNet Bridge - HCMC travel firms, repeatedly complaining about the serious pollution of the rivers and canals in the city, have urged the local authorities to find solutions.

VietNamNet Bridge - HCMC travel firms, repeatedly complaining about the serious pollution of the rivers and canals in the city, have urged the local authorities to find solutions. 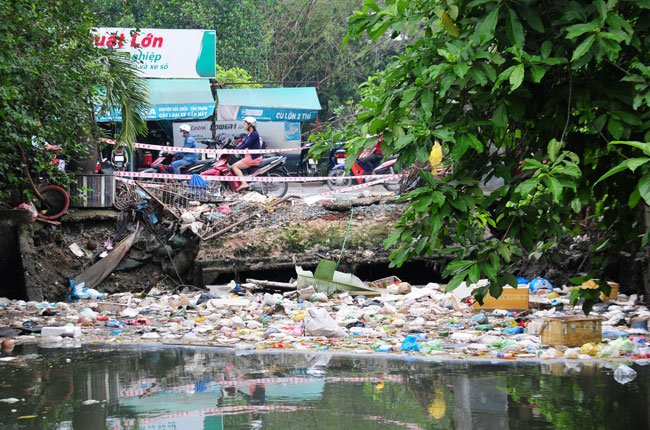 The polluted canals and river include Tau Hu – Binh Dong in district 8 and the Sai Gon waterway route from inner city to Cu Chi suburb district. Having thousands kilometers of rivers and canals, waterways tourism in HCMC is still not attractive to tourists.

The report of the HCMC Tourism Department presented at a meeting between HCMC’s leaders and travel firms on April 13 showed that garbage and hyacinth at the Nha Rong Station on Sai Gon River have seriously affected the transport of tourists, because the garbage causes boat engines to break down, thus pushing the tour fees up.

HCMC has 3,268 river and canal sections with a total length of more than 5,000 kilometers. The canals in the city have long been polluted by domestic waste water, animal husbandry, industrial waste water and residential landfill.

The domestic waste water, about millions of cubic meters a day, plus industrial waste, are the main culprits that poison rivers and canals.

The city also has nearly 1,000 kilometers of rivers and canals with waterways transport, of which about 200 kilometers are maritime routes with four seaport areas and hundreds of kilometers suitable for waterway tours.

However, many of the sections have not been dredged and some still are serious polluted. This, plus the lack of inland waterway stations and the complicated licensing procedures, makes it difficult to develop waterway tourism.

According to Tran Vinh Tuyen, HCM City’s Vice Mayor, the city is organizing an international tourism trade fair in September 2017.

The HCMC Tourism Department will collect opinions from travelers to find out what tourists want, where the city’s tourism in and what it needs to do to develop.

HCMC’s Mayor Nguyen Thanh Phong emphasized that more needs to be done to attract more than 7 million foreign travelers to the city in 2017 and develop tourism in the long term.

Phong said the suburban district of Can Gio is a valuable natural resource to develop tourism, with forests and sea.

The city is considering developing the 2,870 hectare Can Gio sea urban area.

The other important projects include the Binh Khanh bridge in Can Gio, Saigon Safari in Cu Chi district and a 30 hectare park in Thu Thiem.

The black canals in HCM City