The information that the Ministry of Education and Training prohibits Vietnamese children under five years old to go to international schools has raised controversy.

VietNamNet Bridge – The information that the Ministry of Education and Training prohibits Vietnamese children under five years old to go to international schools has raised controversy. 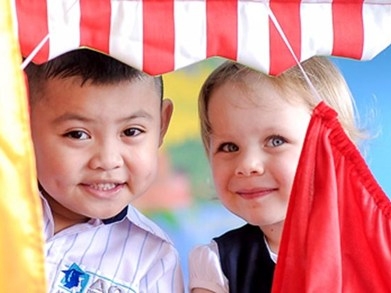 The decree No. 73 on the foreign investment in the education sector stipulates that foreign invested education establishments are not allowed to receive Vietnamese children aged below five.

The decree also stipulates that foreign invested nursery schools must have the investment rate of VND30 million per child at least, while the minimum investment rate must be VND50 million for general schools.

In fact, the decree took place on November 15, 2012 already. However, the provisions of the decree have just been heard by the parents after a conference guiding the implementation of the decree was held.

The information has immediately raised big worries to the parents who have children going to international schools such as Kinder World, ACG Vietnam, or Saigon Star School.

Explaining the prohibition, a senior official of the Ministry of Education and Training, the compiler of the decree, said that under-5-year-old students, who are still not proficient in Vietnamese language, may speak foreign languages instead of Vietnamese.

The official from MOET also admitted 10 percent of Vietnamese students at international schools is a “modest proportion,” while the ideal proportion should be 20 or 25 percent.

However, he stressed that it is necessary to keep a limit on the percentage of Vietnamese students at international schools to ensure the right purpose of the education of Vietnamese people.

In fact, even if MOET does set a limitation on the percentage of Vietnamese students at foreign invested schools, the schools themselves would also set their limitations to ensure the harmonization of the students from different nationalities.

Phan Huy Thao, Headmaster of the Vietnam-Australia School applauded the decree No. 73, saying that it would be better for Vietnamese students to approach the international education when they enter high schools. Meanwhile, if Vietnamese children go to international school when they are too small, they would grow up into western, not Vietnamese.

Thao went on to say that though foreign education systems have many good points, Vietnamese parents should think carefully to ensure that their children can be both grown up as Vietnamese and approach high quality education.

However, parents still keep worried about the new regulations. Nguyen Kim, whose daughter goes to Fosco School in HCM City, complained that if the child has to leave for a Vietnamese school, she may face some troubles. In general, it would take children many days to get adapted to the new environment.

At the school, 70 percent of children are Vietnamese, while the other 30 percent bear other nationalities.

Lao dong has quoted a report by MOET as saying that by the end of 2012, Vietnam had had 111 foreign invested projects in the education sector, mostly in Hanoi (44 projects) and HCM City (51 projects).