VietNamNet Bridge - Another unlicensed hydropower work is under construction, reporters have found.

VietNamNet Bridge - Another unlicensed hydropower work is under construction, reporters have found. 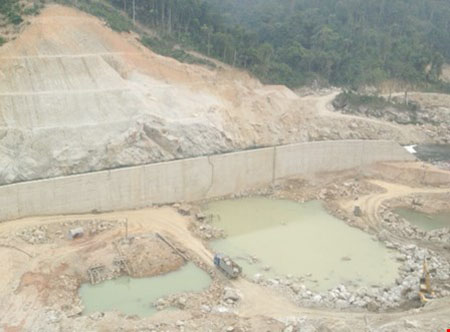 A man, who introduced himself as the commander of the site – Hoang Tien Dung – told reporters that the Dong Van hydropower work was scheduled to open in June 2016.

However, by the time when reporters arrived in the site, a lot of construction items had arisen: houses had been built, a concrete wall with the height of 13.6 meters had been built and thousands of rocks and soil had been exploited. The roads serving the construction were also ready.


Dung said the construction items are just supporting works which need to be prepared before the official construction start, slated for June 2016.

What reporters could see was that the investor built roads that link the major Road No 541. The roads have damaged the transport structure, while the sewer mouth has been blocked and a statue installed right at the foot of the mountain.

When asked about the documents relating to the construction, Dung said he could not show the licenses and documents because they were in Quang Tri province.

Only when reporters pointed out that there were differences between the executed construction items and the technical drawing did Dung admit that these were the main items of the construction work.

Dung promised that documents about the project would be submitted in several days.

On April 19, reporters received some documents from the Dak Rong Hydropower JSC, but the license for the construction work was not included.

It is unclear why the investor still can continue implementing the construction though it cannot show licenses. The local authorities many times sent inspectors to the site, but no problem has been found.

After reporters reported about tproblems they found, the Que Phong district’s chair Le Van Giap signed the Decision No 104 on imposing the fine of VND30 million on the investor.

The decision showed some points that helped ease the sanctions on Dak Rong JSC, including the fact that Dak Rong had submitted a dossier for applying for the construction license to the Nghe An provincial Construction Department.

However, reporters later found out that only on April 21, one day after the decision was released, did the department receive the documents.

The execution of an unlicensed construction work in a commune in the border area has raised big concerns, especially because earthquakes have occurred repeatedly in recent months at the Song Tranh hydropower plant in the neighboring province of Quang Nam.