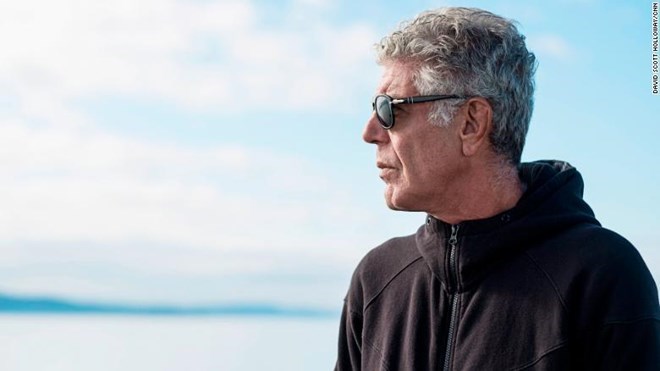 Bourdain died while on a business trip to Strasbourg, France, to work on a shoot for his series “Parts Unknown” on CNN.

In Season 8 Espisode 1 of this programme, Bourdain explored Vietnam’s capital city of Hanoi and had wonderful experience such as tasting ‘bun oc’ (snail soup) and ‘banh cuon’ (steamed rice rolls).

Vietnamese people know more about Bourdain in 2016 when he and the former US President Barack Obama enjoyed ‘bun cha’ in Hanoi (a popular dish with pork meatballs in an oily soup, seasoned with spices and vinegar, and eaten with rice noodles dipped into the sauce) during the president's visit to Vietnam.

Anthony Bourdain shot to fame in 2000 with a best-selling book called Kitchen Confidential: Adventures in the Culinary Underbelly, a behind-the-scenes expose on the world of haute cuisine.

In the book he wrote candidly about his abuse of drugs, including cocaine, heroin and LSD.

The globe-trotting foodie travelled more than 250 days of the year to film his show.

His work brought him to far-flung and often dangerous locations such as Libya, Lebanon, and Gaza.

His first TV show was A Cook's Tour on the Food Network in 2002. Three years later he joined the Travel Channel with Anthony Bourdain: No Reservations, picking up two Emmy Awards.

He moved to CNN in 2013 with a new travel and food show, Parts Unknown, which is in its 11th season.