Vietnam and the threat of cyber attacks

The book entitled "Cyberspace: The Future and Action" by Minister of Public Security Tran Dai Quang, who is now Vietnam’s President, analyzed the key issues in cyberspace, as well as their impact on national security.

VietNamNet Bridge - "Cyberspace is a revolution where opportunities and challenges are intertwined. The great opportunity is once again placed on the shoulder of the Communist Party of Vietnam, the elite and loyal representative of the interest of the Vietnamese people, the one that is chosen by history to shoulder the great responsibility of the nation, Mr. Tran Dai Quang said. 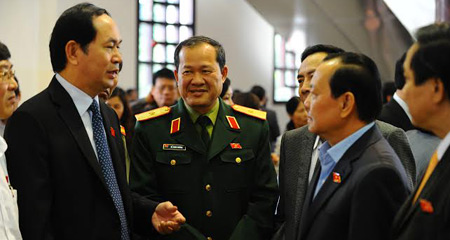 In May 2014, BKAV - Vietnam’s most famous IT and network security company - reported that more than 200 websites of Vietnam were hacked by Chinese hackers, including six websites of government agencies, which have the gov.vn domain name. Chinese hackers even noted on these sites “By: China Hacked".

The attacks took place in the context that Vietnam was protesting China's illegal deployment of its HD 981 oil rig in Vietnam’s exclusive economic zone and continental shelf.

BAKV’s Vice Chair Ngo Tuan Anh told local newspapers that these sites suffered from attacks of denial of service (DDoS) or interface change. The attacks by those who claimed themselves as Chinese hackers to Vietnamese websites were similar to many other attack cases around the world, which occurred at the time of conflicts or tense relations between countries, for instance the case of Ukraine and Russia.

Another cyber attack that the public still remember was the DDoS attack on VietNamNet, one of the largest online newspapers in Vietnam, in the two consecutive years of 2010-2011. Because of the attacks, VietNamNet’s readers dropped by three fourths and the newspaper suffered loses of up to VND1 billion ($60,000) within a week.

After that other news websites like Dan Tri, Kenh14, and Vneconomy were also attacked in the form of DDoS in October 2014. The common feature of these sites is they were technically supported by VCCorp.

Mr. Nguyen Tan, Deputy General Manager of VCCorp, said on VTC online newspaper that the attacks caused losses of about VND20-VND30 billion ($1-$1.5 million) to the company. It is estimated that the cost for attacks to these websites was up to $500,000.

These are the largest cyber attacks to Vietnamese websites in recent years.

The "back door" of cyber-attacks from China

The book entitled "Cyberspace: The Future and Action" by Minister of Public Security Tran Dai Quang, who is now Vietnam’s President, analyzed the key issues in cyberspace, as well as their impact on national security.

The measures to protect the sovereignty and national interests in cyberspace in Vietnam is one of the issues that the President emphasized in his book.

According to the author, from the perspective of national security of Vietnam, cyberspace has created fundamental changes in intelligence operations, special foreign bodies, forming the new method of spy - cyber spy.

According to the book, Vietnamese agencies have discovered many cases in which even those working in the armed forces were recruited by foreign agencies through the cyberspace.

Specifically, in Vietnam, some elements were instructed by overseas organizations through the Internet to conduct sabotage activities.

The most recent cases were the  plot of some Falun Gong practicers to pull down the monument of Lenin in Hanoi and the case of a man named Nguyen Dinh Kha, instructed by the overseas organization against Vietnam named "Vietnam National Party", to place explosives at the statue of President Ho Chi Minh.

The book written by General Tran Dai Quang also pointed out the fact that many devices manufactured by Chinese firms like Huawei and ZTE, were detected by security companies and authorities of many countries, including Vietnam, to contain malware, which are the "back doors" allowing remote access and control.

Vietnamese providers of telecommunications and Internet services not only use the core infrastructure but also supply the devices manufactured by the Chinese firms to the consumers.

In addition, automatic systems in many industries such as energy, metallurgy and chemicals also originate from China, which came to Vietnam under EPC (engineer, procurement and construction) contracts performed by Chinese contractors.

Some global spyware programs of the US have recently disclosed that China has exploited the advantage of a supplier of hardware to implement monitoring and spy activities.

Mobilizing the power of the entire political system and the population is the solution to protect national sovereignty and interests in the cyberspace of Vietnam today.

In his book, Mr. Quang noted that with openness, multi-dimensional nature of cyberspace, cross-cutting benefits and risks, the use of extreme administrative and technical measures will not be effective.

Therefore, state management of the Internet must keep up with development, with combination of multiple solutions, including administrative, technical and educational.

General Tran Dai Quang emphasized in his book that cyberspace must actually become a new world, the expanded living space and the space to create new national strength.

Then the value of cyberspace would be blended with the values of social life so we have to intelligently combine the power sources consisting of hard and soft power. Many people call it smart power.

To master and protect the cyberspace based on international laws and standards. Vietnam needs to improve the system of policies and laws on cyberspace. In particular, developing human resources in the era of Internet connection is critical.

“The Communist Party of Vietnam, with experience and strong stuff, with its scientific and revolutionary qualifications, will certainly again make a glorious revolution. It is the faith in victory that is always full in my heart and I also want to connect that faith to the reader through this book," General Quang wrote.