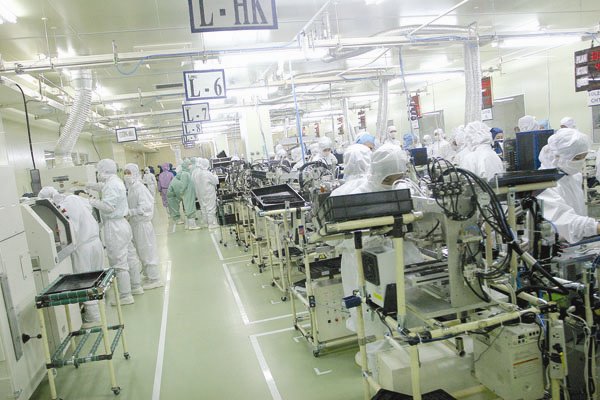 However, according to the 2016 World Economic Forum, the efficiency of technology transfer from foreign invested enterprises (FIEs) in Vietnam is surprisingly low. Vietnam ranked 57th in the world in 2009, while it ranked 103rd in 2014, falling by 46 grades after five years, much lower than other regional countries, including Malaysia (13th) Thailand (36th), Indonesia (39th) and Cambodia (44th).

The analysis of other criteria also gives unsatisfactory results.

In 2015, of five business fields which made up 49 percent of the added value of the whole industry, three were low technology fields, including the processing industry, textiles & garments, and footwear. The other two fields, mining and steel manufacturing, had medium technology.

The industry which made up 12.2 percent in added value was electronics, computer and optical products. Though it is considered ‘hi-tech industry’, the works implemented in Vietnam are simply assembling.

The labor productivity in Vietnam industries increased very slightly, just 2.4 percent per annum in 2006-2015, or 3.9 percent lower than the country’s GDP growth rate.

Regarding the quality of transferred technology, a report from MPI showed that more than 80 percent of FIEs use medium level technology, 14 percent low technology and only 5-6 percent use high technology.

Analysts commented that the policies and business environment do not stimulate  technology transfer.

Under decentralization, provincial authorities have the right to grant investment licenses to foreign investors. As localities try to attract more FDI, they rush to build industrial zones and offer very high investment incentives, which, in many cases, go beyond the national incentive frame.

Some projects could not satisfy the requirements in some localities, but were still welcomed in other provinces.

Meanwhile, FIEs don’t have power to transfer modern technology if they invest mostly in labor and capital intensive industries. Electronics and computer manufacturing are considered ‘high technology industries’, but the factories foreign investors have in Vietnam only assemble components, the work with the lowest value in the global production chain.