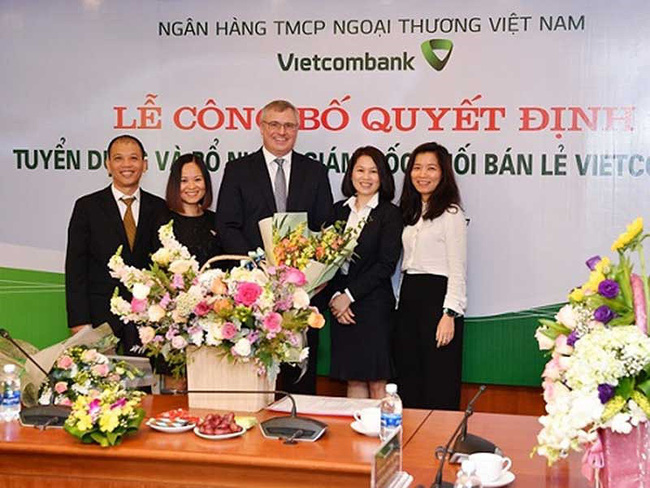 Vietcombank, one of the three largest state-owned banks, has for the first time recruited a foreigner for a high post.

Eiji Sasaki of Japan officially became a member of the board of directors and deputy CEO of the bank. The banker was once Mizuho Bank’s Asia business director.

Prior to that, Vietcombank recruited Thomas William Tobin of Canada to work as director of the retail banking service. The expert has 30 years of experience in finance & banking in Vietnam and markets similar to Vietnam. He also held high positions at HSBC and other institutions.

At Techcombank, Paul Simon Morris, the CEO, is a foreigner. And VIB, ACB and Eximbank have assigned posts in the board of management to foreigners to implement their plans to develop personal and consumer lending divisions.


Financial experts have said that hiring foreign CEOs is now a choice of many banks which feel pressure from 100 percent foreign owned banks. After many reforms, half of the bank’s management board is composed of foreigners.

However, it is costly to hire foreign experts. A source said the pay for an experienced director of retail banking is no less than VND5-7 billion a year.

One Vietnamese banker said a CEO can receive no less than $25,000 a month, or VND575 million. He heard that one bank had offered VND8 billion to attract foreign talents.

Explaining the decision to recruit foreigners, Vietcombank’s chair Nghiem Xuan Thanh said the bank has a long term plan to develop retail banking services and hopes an expert will help the bank implement the plan.

Nguyen Tri Hieu, a banking expert, commented that foreign CEOs in Vietnam banks act as a bridge to connect Vietnam and the rest of the world.

Some Vietnam banks have expanded their business by setting up branches in Myanmar, Laos and Cambodia. However, they still have not joined the international financial playing field.

However, Hieu commented that while foreign experts have experience in corporate governance and business expansion, they are not good at bad debt settlement. This is because the debt settlement process in Vietnam is related to many specific conditions.

An HSBC (Hong Kong & Shanghai Banking Corporation) report released in 2016 showed that 35 percent of foreign specialists said working in Vietnam helped them earn more money than in their home countries.