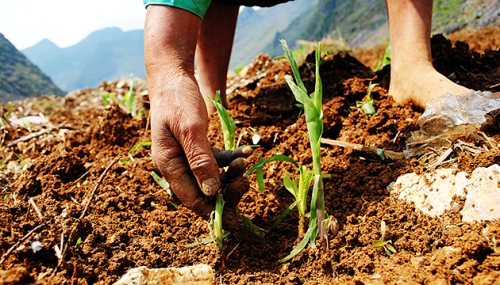 Vietnam, for the first time in many years, saw negative growth in its agricultural production growth rate (-0.18 percent) in the first half of the year.

Meanwhile, 70 percent of Vietnamese earn their living in agriculture production and 46 percent of the population work in the sector.

Cuong, when citing factors that hinder investment in agriculture, emphasized the ‘land bottleneck’.

In 1993, the State allocated land to farmers to allow them to organize long term production. Therefore, land accumulation is expected to face difficulties.

In fact, land accumulation has been implemented in many localities, under this or another form.

In Ha Nam province, for example, farmers, realizing that it would be more effective to organize large-scale production, have transferred their land use rights to enterprises for certain periods.

However, the transfer is still limited with land limits as stipulated in the current laws. Enterprises now can only receive land-use rights transfer for 20-50 hectares of land.

In some other provinces, cooperatives have been set up in which farmers gather their land and join forces to run large-scale production.

Nguyen Van Binh, head of the Communist Party’s Economic Committee, speaking at a recent conference on agriculture development, affirmed that the Party will create policies to encourage land accumulation.

He said the household-based economy in rural areas had fulfilled its historical mission. It is now time for Vietnam to organize large-scale goods production to join the global market.

“It is not households now, but cooperatives and enterprises which must be the nucleus for agriculture development,” Binh said.

The concern is that this would lead to farmers losing their land, and thus, their livelihood.

“The large production with mechanization and advanced technology will help create more jobs and bring higher income to people and producers,” he said.

Binh noted that though many problems still exist, many large corporations have decided to pour money into agriculture projects.

Vingroup, for example, has set up Vineco with investment capital of VND2 trillion. The company plans to develop 300 glass houses within two years, focusing on producing green vegetables.