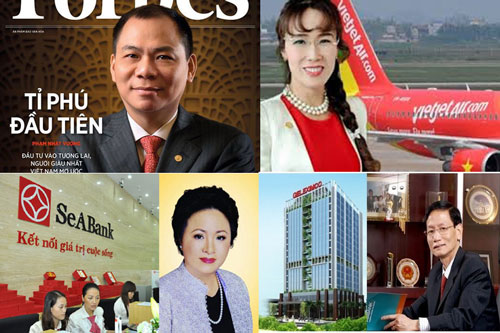 With stock assets valued at VND22.7 trillion, or $1.02 billion by October 27, Trinh Van Quyet has officially become the second dollar billionaire in Vietnam.

In September 2014, the report of a Swiss bank showed that two Vietnamese were named on the list of super-rich people in the world with total assets of $3 billion. However, the report did not reveal their names.

One of the two must be Pham Nhat Vuong, president of Vingroup, which was established as a real estate developer, but has recently invested in many different business fields. Vuong then had a stock asset value of over $1 billion.

The other person was believed to be the owner of a business which has not listed its shares on the bourse.

In early 2016, Bloomberg reported that Nguyen Thi Phuong Thao, the owner of the only private airline in Vietnam – Vietjet Air – could be the first billionaire and the second dollar billionaire in Vietnam after Vietjet Air holds an IPO (initial public offering).

However, Thao’s assets are even bigger because these not only include Vietjet’s shares, but also resort properties in many localities in Vietnam – Furama Resort in Da Nang City, Ana Mandara in Nha Trang, An Lam Ninh Van Bay Villas and shares of HD Bank. However, the assets of the businesswoman have not been made public.

There is another hidden billionaire – the owner of Tan Hiep Phat Group Tran Thanh Quy. The shares Quy holds, 100 percent of Tan Hiep Phat, were estimated by some foreign newspapers as valued at $2 billion.

An analyst commented that there will be big changes on the list of stock millionaires once more businesses list their shares on the bourse.

One of them is Thaco, an automobile manufacturer, whose owner is Tran Ba Duong, now described as a ‘hidden billionaire’.

With revenue of $2 billion in 2015 and post-tax profit of VND7.1 trillion, Thaco is believed to have value of over $2 billion, 50 percent of which belongs to Tran Ba Duong.

Nguyen Thi Nga, president of BRG and SeABank, is also a potential candidate for the ‘dollar billionaire’ title.

The business circle also respects Vu Van Tien, the owner of Geleximco, who, according to Dau Tu, together with a Chinese company, has registered four projects, totaling $50 billion.