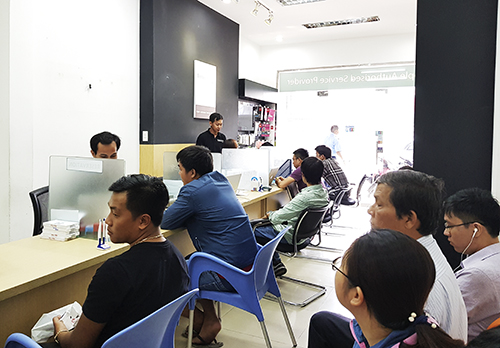 Apple is replacing the battery for iPhone 6 and later models for $29 instead of $79 as initially planned. The replacement will be implemented throughout 2018.

In Vietnam, Apple’s authorized warranty centers have begun replacing the battery for iPhone users, for about VND730,000.


However, the battery replacement won’t be applied to all iPhones. Staff at the warranty centers will check the devices to find if the battery needs replacement. If so, the users will have to pay a deposit and take phones back for use until they are called to pick up the new battery.

“Users need to wait 7-10 days to get batteries to be carried from overseas to Vietnam,” an iPhone user explained.

However, the policies on battery replacement have been applied in different ways at warranty centers. A worker from a center in district 3, HCMC, affirmed that batteries will be replaced for all iPhone 6 and later-generation products at VND630,000, including locked and repaired iPhones.

iPhone users have expressed their dissatisfaction about Apple’s policy, commenting that the US-based smartphone manufacturer ‘doesn’t sincerely fix the problems’, but still can make money from the problem.

“It is the fault of Apple. Why do we have to pay for Apple’s fault?” Do Quoc An, a reader emailed to the editorial board. “It is obvious that Apple is selling battery to users, not compensating for the troubles it caused.”

“What I can see is that Apple is blatantly cheating customers,” a reader with nickname quoc_thong-2004 commented.

Some users have threatened not to buy iPhones.

“It is really a shame that a world leading brand still tries to make money from the scandal. It should offer free replacement to compensate for the troubles it caused. We have been cheated. I’ll boycott the brand,” Minh Hoang Tran, a user, said.

Other users were less negative, saying that Apple should offer free battery replacement or set a lower price, because VND730,000 for a battery is high for many Vietnamese.

So Hoa (digitalization), a website specializing in hi-tech issues, surveyed 2,500 iPhone users and found that 71 percent of Vietnamese were unsatisfied with Apple’s policy, while only 27 percent agreed with Apple and others had no opinion.