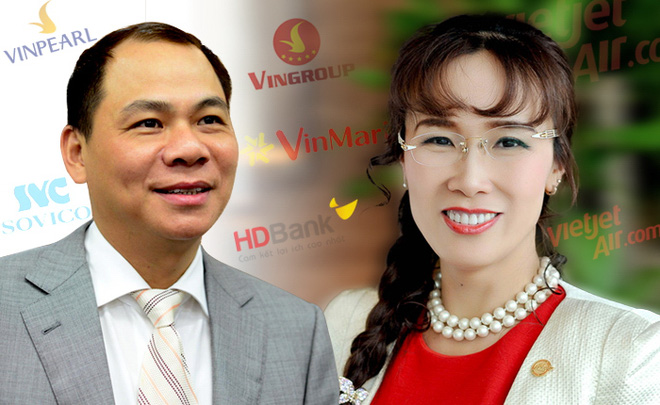 Forbes this year added Nguyen Thao, CEO of Vietjet, with stock assets worth $1.2 billion, to the 2017 list. Thao is now the only female dollar billionaire in South East Asia.

Pham Nhat Vuong, president of Vingroup, has $2.4 billion in assets.

Both Vingroup and Vietjet have witnessed strong business growth in the last two years.


Vingroup’s operation scale has been growing rapidly. Established as a real estate developer, Vingroup in recent years has injected money into many other business fields, from retail, hotel, and agricultural production to the education sector.

Vingroup reported total revenue of VND58.5 trillion in 2016, a sharp increase of 72 percent over 2015. Of this, the revenue from the real estate sector for the first time exceeded the $1 billion threshold, reaching VND38 trillion, an increase of 80 percent. This came from major projects, Times City Park Hill, Vinhomes Nguyen Chi Thanh, Gardenia and the resort villas in Nha Trang and Phu Quoc.

In 2016 alone, Vingroup put 11 commercial centers into operation. Meanwhile, the revenue from retail doubled from VND4.3 trillion to VND8.9 trillion.

As for Vietjet, the private air carrier has been growing well since its establishment. Its total revenue in 2016 was VND27.5 trillion, up by 40 percent, while the pretax profit was VND2.4 trillion, double 2015.

Vietjet had two major sources of income – commercial flights and aircraft sales, each of which brought turnover of VND12 trillion last year.

On February 28, Vietjet listed its shares at the HCMC Stock Exchange. Its capitalization value has reached VND38 trillion, approximately that of Vietnam Airlines, the nation’s flag air carrier.

There is not much information about the operation of Sovico Holdings, Phu Long Real Estate and HD Bank, where Thao also invests.

Both Vuong and Thao studied at prestigious universities in Moscow, started their business in Russia and became successful businessmen before they returned to Vietnam.

Analysts commented that Russia is the ‘cradle’ of Vietnamese billionaires. Nguyen Dang Quang, the owner of Massan Group and Ngo Chi Dung of VP Bank, also studied in Russia in the past.