Vietnamese goods could ‘sink’ together with Chinese goods 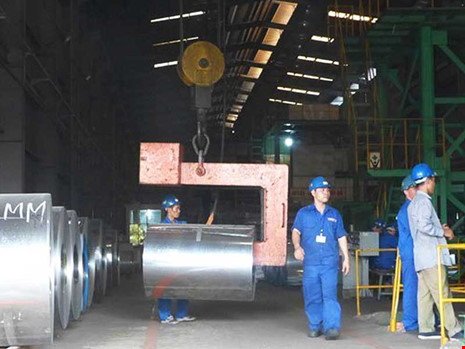 Australia on October 7 released a decision on initiating an anti-dumping and anti-countervailing investigation on galvanized alloy steel imports from Vietnam.

Prior to that, the Competition Administration Department (CAD), an arm of the Ministry of Industry and Trade (MOIT), said that cold rolled steel and carbon steel have been sued by some US companies.

In the petition to the US Department of Commerce (DOC), the plaintiff points out that since the day the US began imposing high anti-dumping and anti-countervailing duties on Chinese steel (200 percent and 256 percent, respectively), Chinese exports to the US have been on sharp decrease.

Meanwhile, the exports of these kinds from Vietnam have been increasing rapidly.

US companies believe that Chinese manufacturers tend to bring the steel to Vietnam, where they implement simple production phases before shipping to the US to avoid high duties.

Besides steel, some other products such as plastics, wooden furniture and granite, are also in the same situation.

The representative of a Vietnamese granite company said some months ago, Turkey concluded that some Vietnamese companies tried to evade the anti-dumping duty the country now imposes on imports from China.

As a result, the country decided that the anti-dumping duty applied to Chinese products would also be imposed on exports from Vietnam.

“Vietnamese companies got involved in the misfortune and lost the Turkish market,” he commented.

“The companies import finished products, pack them and label them with ‘made-in-Vietnam’ products. After that, they export the products with Vietnamese C/O (certificate of origin),” he explained.

An analyst has warned that Chinese trade fraud have had adverse effects on Vietnamese export products.

“I know many honest enterprises have become victims of unfair investigations. They have lost prestige and their products face doubts about quality by foreign partners,” he said.

Vietnam’s wooden furniture exports to the US once faced the same situation. However, Vietnamese products later escaped the anti-dumping duty after Vietnamese manufacturers could prove that the input materials were not from China.