Associate Professor Nguyen Ngoc Dien, Vice Rector of the University of Economics and Law under the Vietnam National University Ho Chi Minh City, has become an official member of the French Academy of Overseas Sciences.

Associate Professor Nguyen Ngoc Dien, Vice Rector of the University of Economics and Law under the Vietnam National University Ho Chi Minh City, has become an official member of the French Academy of Overseas Sciences, making him the first Vietnamese person to be awarded the status. 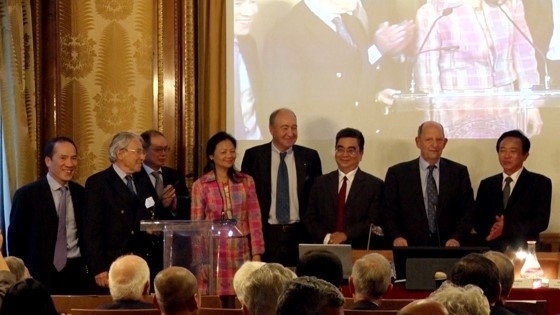 Speaking at a ceremony held in Paris, on November 17, Chairman of the French Academy of Overseas Sciences, Yves Gazza congratulated the Vietnamese scientist on his membership, expressing his hope that Dien would make further contributions to conducting research and training in Vietnam and to the academy in general.

Born in 1959, Associate Professor Nguyen Ngoc Dien has made positive contributions to promoting the relations between Vietnam and France and other French-speaking countries. He is also currently a member of the Board of Directors of the Francophone University Agency and President of the Francophone University Association in the Asia Pacific region.

Sharing his thoughts at the event, Associate Professor Nguyen Ngoc Dien said that it was an honour to become a member of the prestigious academy, which was founded in 1992 with the aim of fostering academic research in French colonies.

He said he considered his membership as a good opportunity to introduce Vietnam to French academicians and people, thus helping our international friends to gain a deeper understanding of his motherland.

The membership status of the academy is granted to those with veteran experience in conducting research, having established scientific projects which focus on mankind and pressing social issues, whilst contributing to fostering social progress and protecting human values.