More than 3 million tons of meat were consumed in Vietnam in 2016, according to Euromonitor. With a value of $18 billion, Vietnam is the third largest market for meat in Asia, behind China and India.

VietNamNet Bridge - More than 3 million tons of meat were consumed in Vietnam in 2016, according to Euromonitor. With a value of $18 billion, Vietnam is the third largest market for meat in Asia, behind China and India. 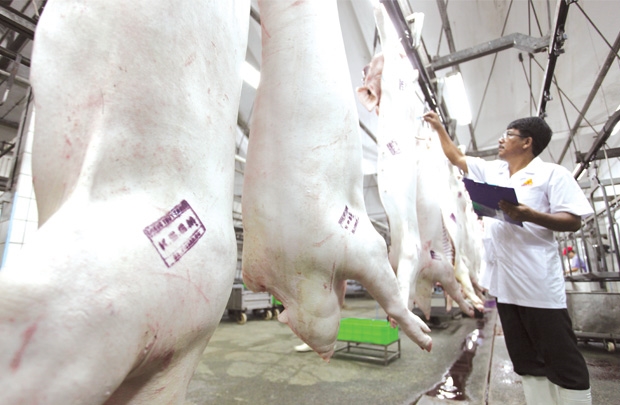 The remaining is imported from Australia, Cambodia, Thailand and Laos. He believes that farming milk and meat cows has great opportunities for development.

Hoang Anh Gia Lai imports cows from Australia, about 250 kilo per each. It feeds cows grass and maize.

It is estimated that the weight of every cow increases by 1.6 kilos per day.  Hoang Anh Gia Lai can sell cows after six months, when they weigh 500 kilos.

The cow sales make a big contribution to the conglomerate’s revenue. It reported revenue of VND2.631 trillion in the first nine months of 2016, a notable increase compared with the same period one year before.

Anova Farm is now developing pig farms in Binh Thuan and Ba Ria-Vung Tau provinces where there are 2,400 sows and 12,000 merchandise pigs.

Annova Farm only produces clean meat, so it farms pigs with modern closed technology with breeders from the US, animal feed meeting Global GAP and vaccine meeting WHO-GMP standards. It has a specific traceability system, applying QR code and management software which traces the types of animal feed and medicine used during the culture process.

According to Euromonitor, in 2016, the meat processing industry in Vietnam grew by 6 percent in value and 5 percent in output. It is expected that the annual 2.2 percent growth rate in output and 1.9 percent in revenue would be obtained by 2021.

Danny Le from Masan said, when buying Saigon NutiFood, plans to use technology and experience of the company as a springboard to join the meat market.

When buying a 24.9 percent stake of Vissan, Massan considers this key to the 3F chain. Only 3F chain produces meat at reasonable prices and provides clean meat.  Masan also took over Proconco and Anco, the animal feed manufacturers,

Nguyen Lam Vien, general director of Vinamit, a dried fruit manufacturer, has decided to jump into the meat market because he believes the demand for clean meat is on the rise.

Vinamit’s pig farm is the first farm in Vietnam applying the US and European Animal Organic standards. Vien not only wants to provide clean meat, but also meat products, which are the biggest source of profit.