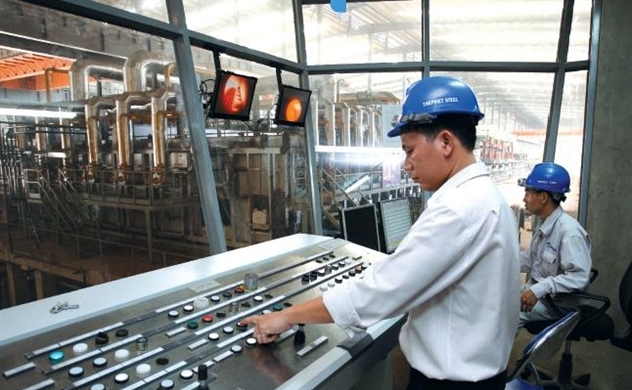 The ‘heat’ of the steel industry can be seen in the high production capacity of 30 million tons per annum, the highest in Southeast Asia, according to the Vietnam Steel Association (VSA).

The association predicted that the industry would maintain a high growth rate of 20-22 percent and attract more investors.

Japanese Kyoei Steel Group has taken over the Vietnam-Italy Steel JSC and plans to restart the northern steel mill later this year.

Prior to that, Hoa Phat announced the plan to invest VND52 trillion in the Dung Quat steel complex in Quang Nam province. Pomina, Hoa Sen, Nam Kim and Ton Dong A all also have investment activities to improve their competitiveness.

An analyst said Chinese steel is the biggest threat to Vietnam’s steel industry. China, the world’s biggest steel exporter, is seeing its exports get stuck because of protectionism applied by the US, Canada, Turkey, Malaysia, Thailand and Indonesia.

This means that a part of Chinese steel output would become redundant and Chinese manufacturers would try to export the steel to Vietnam.

URC predicted that the oversupply would continue in the next three years.

In such conditions, Vietnam’s steel manufacturers need to take action. Nguyen Thanh Trung from Ton Dong A said the company will focus on upgrading product quality and expanding the market. This is also the strategy of all the big companies in the industry.

The battle in the southern market

The south is believed to be the ideal destination for steel manufacturers to expand their markets. This is the area which generates nearly half of Vietnam’s GDP and strong FDI flow.

Meanwhile, according to Thep Viet’s president Do Duy Thai, the steel consumption there is just equal to half of the north.

Among suppliers, there is no distributor holding more than 20 percent of market share in the south. And there are not many huge projects planned in anticipation of the growth of the structural steel demand, according to Rong Viet Securities.

Hoa Phat appears to be the first manufacturer which can see the great potential of the southern market. Rong Viet Securities estimates that with the capacity of 1 million tons of structural steel a year from its Dung Quat complex, Hoa Phat will be a big influence in the southern steel market.

As for Pomina, Do Duy Thai from Thep Viet, which is holding the controlling stake in Pomina, said ‘Pomina has its own advantages’. The manufacturer mostly makes high-quality structural steel, which amounts to 30 percent of total structural steel demand.