Vietnam’s tourism does not depend on dog meat

After VietNamNet published the story about dog meat, we have received a lot of opinions from readers. Part of them disagreed with the French visitor and part of them agreed with him. Below are the opinions of the first group.

After VietNamNet published the story “French tourists threaten to boycott Vietnam for dog meat,” we have received a lot of opinions from readers. Part of them disagreed with the French visitor and part of them agreed with him. Below are the opinions of the first group. 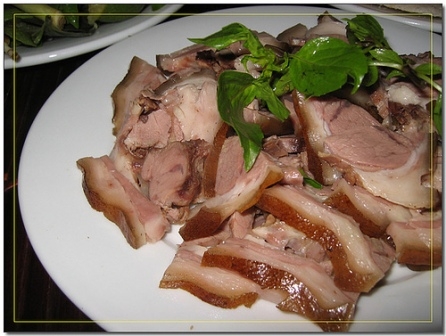 According this reader, throughout history, dog meat is a specialty and the quiche of the Vietnamese. The Vietnamese eat dog meat like pork, chicken, buffalo meat or beef. If saying like the French man, then the French should be vegetarian because they also raise chickens, pigs, goats, cattle and they should not slaughter them for meat.

“The French also loves to eat goose liver. And if we see the way they raise goose for taking livers, we will find them cruel and inhuman too,” he added.

According to Thanh Hai, food is a part of the culture. Every country in the world has the culinary culture of their own. That is one of the tourist attractions. People go all over the world not only for sightseeing, but also to enjoy the delicious food. With Vietnamese, dog meat is a specialty, so when you visit the country of Vietnam, learn about Vietnamese culinary culture, you should not belittle the food.

“We should not side with the French man to criticize dog meat, a culinary culture of ours because food is one of the factors that make the difference in the local culture. If a foreign tourist says that he will boycott Vietnam because of the killing of buffaloes in the buffalo fighting festival in Hai Luu (Lap Thach, Vinh Phuc) or in some other festivals of ethnic minorities in Vietnam, we will remove all traditional festivals? And there are many other comments of foreign visitors, if we follow them all, we will lose our culture,” Thanh Hai wrote.

He confirmed: “Foreign visitors come to Vietnam and Vietnam's tourism industry develops or not, it does not depend on the dog meat or blood pudding but other factors!”

Reader Hoang Nguyen questioned: “The Koreans also eat dog meat but their country is still touristy! So what is the relationship between dog meat and the civilization of a country?”

“After reading the article French tourists threaten to boycott Vietnam for dog meat, I want to ask the French man about his feeling when he eats foie gras and snails, chicken, beef and pork, which are also domestic animals. Any animal bleeds when they are slaughtered. Unless you're a vegetarian, if you eat meat but you voiced to disdain Vietnam for eating dog meat, I do not admire him,” Hoang Nguyen wrote.

“When in Rome, do as the Romans do”. Respecting the culture of each country is civilized, the French man!” Hoang Nguyen stressed.

Another reader named Tran Quoc Minh Thong wrote: “Reading the article French tourists threaten to boycott Vietnam for dog meat, I found it funny. This French tourist made a huge mistake: bringing the values of Western culture to criticize the cultural values of the East, in this case is considering eating dog meat in Vietnam disgust, horror. This tourist was completely ignorant about Vietnam culture when considered eating dog meat, a characteristic in food culture of Vietnam, is a brutal, reprehensible act.”

He continued: "These facts do not represent the intelligence of a true civilization. But it is an act of expression for the retarded and shameful cruelty which would destroy the cultural values and our spirit. For this reason, we will not travel to Vietnam again if you continue to eat dog meat, with no respect for law on the protection of pets and other animals." I really do not understand why this tourist could speak out this saying. It shows his ignorance to some extent. Eating dog meat is nothing shameful or underdeveloped. South Korea is a country that also eats dog meat, but they are powerfully developed and are proud of their own culture. Many tourists go to that country.”

“Many foreigners coming to Vietnam tried dog meat and they liked it simply because dog meat is delicious, nutritious food and has a long-standing history in Vietnam. A word of advice for the French tourist, when traveling to any country, you need to thoroughly understand the culture of that country. You should remember this sentence "When in Rome, do as the Romans do." When you come to our country, you should respect our culture and vice versa. When I go to France, I will respect the culture of your country. You have absolutely no right to take the cultural values of your country to contempt and condemn the culture of our country,” he emphasized.

“Each country has its values, its own cultural qualities. For our country, we are proud of the long-standing culture, including eating dog meat. Nothing is shameful, humiliating when showing the good cultural values of our country to international friends. I hope that when you read this article, you will think through, and withdraw your words,” Tran Quoc Minh Thong (minhthong6792@gmail.com) wrote.

“I do not want to use big words to talk about the French tourist’s comment on dog meat. I just want to tell you that culture is identity; it is unable to be distinguished between high and low,” wrote reader Duong Ngoc Khoa.

“Culture, especially eating is the way people adapting themselves to natural conditions. Eating is a natural demand. But when it develops at a higher level, it becomes a culture where people still call food culture. Eating dog meat is the culinary culture of the Vietnamese residents in particular and of people of agricultural culture in Asia in general. This dish has gone into folklore, become a culinary delicacy in Vietnam,” Khoa analyzed.

“Each ethnic group has a separate culture, and you cannot bring cultural norms of this nation to impose on other peoples. I agree that “When in Rome, do as the Romans do.” Each nation always has a dish that other people cannot eat, even disgusting. However, if expressing disdain, it is the cultural stigma,” he continued.

“I am very sad that a tourist from a civilized country makes such uncultured comments. If only because of the saying of a French tourist and a number of foreign tourists that Vietnamese people do not eat dog meat anymore, it is ridiculous. I agree that some of the cultural festivals have some brutal features, such as cutting pigs, stabbing buffaloes, bullfighting ... and they should not be promoted. But for the habit of eating dog meat, we have nothing to be ashamed of. If only because the Vietnamese eat dog meat that this tourist does not go to Vietnam again, I would not be sad for the development of tourism in Vietnam. I'm just sad for the visitor who has overly simplistic view that ignores unique cultures in Asia,” Khoa wrote.

1. In recent years, some Western countries, for example Spain in 2009, have warned the people to prepare beef steak thoroughly to reduce the risk of getting diseases from tapeworms. But most of people have ignored because they prefer the traditional beef steak: a piece of beef of about 2-3cm thick, being fried quickly on big fire for having a brownish outer layer, but the meat inside is still red and it will pour fresh blood when it is cut with a knife. Is this dish more civilized than tiet canh or blood pudding?

2. The closest animal to humans is probably the monkey. Who (Eastern or Western) have invented the use of monkey brain to make vaccines for humans? And then there is an industry that raises and kill monkeys. So how many people in the West are “eating monkey meat" every day?

3. Horses are one of the great friends of European farmers and warriors. But Do the Europeans eat horse meat? In Germany, they also sell pigeon meat in supermarkets.

4. What about the favorite cuisine in France – the foie gras? How do the French have that cuisine? Typical foie gras production involves force-feeding birds more food than they would eat in the wild, and much more than they would voluntarily eat domestically. The feed, usually corn boiled with fat, deposits large amounts of fat in the liver, thereby producing the buttery consistency sought by the gastronome. The fat liver is processed foie gras for export and they are proud of this food. Is it civilized?