While dragonfruit in Vietnam has seen prices plummet, the fruit is being sold for VND200,000 per kilogram in Australian supermarkets and VND600,000 in the Netherlands. 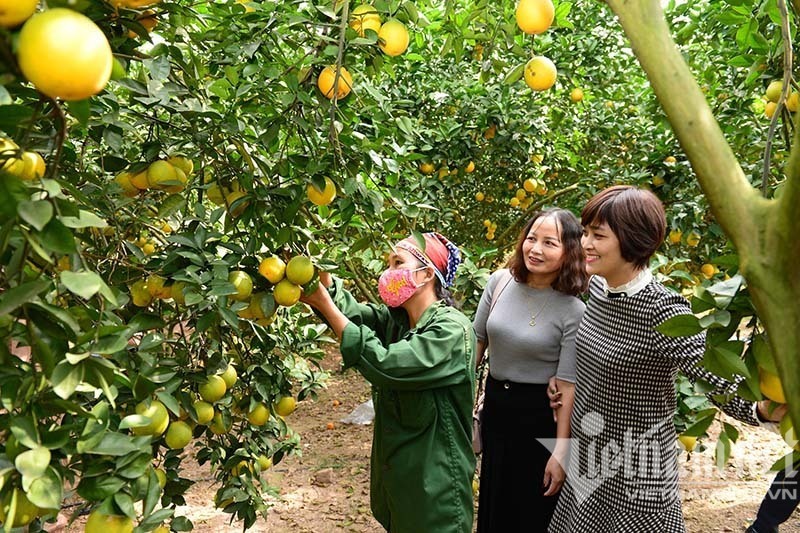 Not only dragon fruit but many other fruits are selling at high prices overseas, which shows the great potential of foreign markets. The potential is worth billions of dollars more.

In recent years, when litchis were plentiful, they were packed in boxes and exported to Japan, where they sold for VND350,000-500,000 per kilogram at supermarkets, a very high price level compared with domestic prices.

However, only in 2021, with repeated offers and sale promotion campaigns did Vietnam’s litchis cause a ‘global fever’. In Japan, litchis became a topic of discussion among diplomats and businesses and sold like hotcakes.

At an auction in mid-June in 2021 in Perth, Australia, one box of Vietnam’s fresh litchis sold for 3,000 AUD, or VND52 million. Meanwhile, litchis sold at VND500,000 per kilogram in France, Germany and Netherlands.

Green mango has been introduced by Vietnam Trade Office in Australia at the price of VND300,000 per kilogram. Some restaurant chains in Sydney have added green mango to their menus, helping advertise the fruit, and taking orders and delivering products.

Vietnam’s longan is selling at supermarkets in Germany and the Netherlands at VND430,000-490,000 per kilogram, which is 15-20 times higher than the domestic price. Longan has also entered the Singaporean market, targeting high-income earners with the price of VND220,000 per kilogram.

A representative of an export company said in 2021 his business exported longan to Europe, the US and some Asian markets, but only to survey the market. The selling price was high, but the export volume was modest.

In 2021, businesses cooperated with Vietnam’s agencies in Australia to sell dracontomelum at VND300,00 per kilogram. This was the fist time Vietnam exported the fruit, earning VND6.5 billion.

In early 2022, dragon fruit continued to be available at supermarkets in western and southern Australia for VND200,000 per kilogram.

Nhu Nguyen, a representative of a fruit import and export company, said in the Netherlands, dragon fruit is considered a kind of ‘super-food’. It’s not easy to buy it there because the fruit is available only at markets for Asians and sells for VND600,000 per kilogram.

Nhu believes that Europe is a market with great potential thanks to high demand and a high number of consumers. Vietnam’s tropical fruits are diverse and typical. This means that opportunities in markets are great if Vietnam has reasonable policies to exploit them.

According to the Vietnam Trade Office in Belgium and EU, European consumers have high interest in Vietnam as the advantages EVFTA (EU-Vietnam Free Trade Agreement) brings are now clear. 2021 was an important year for Vietnam as fresh litchis and longan were exported to the Netherlands, Belgium, France, Germany and the UK, and became ‘hot’ items.

FTAs (free trade agreements) have brought great opportunities to Vietnam’s farm produce to enter picky markets such as the US, EU, Japan and South Korea. However, to take full advantage of the agreements, Vietnam needs to renew the production process to make high-quality products with codes for the growing area, and pay attention to branding and trade promotion.

Minister of Agriculture and Rural Development Le Minh Hoan said the first container of Dong Thap mango exported has been to the US. He took pride in the fact that the Vietnamese fruit could be sold at high prices. However, he said the amount of farm produce sold in foreign markets remains modest, though they have high quality. Farm produce exports to the markets are mostly sold at shops for Asian people.

“There are some consignments sold at high prices, but the sales are unsustainable. This means that some businesses connect to foreign businesses, and there is no strategy for every market,” he said.

He said that only when Vietnam can bring farm produce to foreign markets and sell in their distribution networks will Vietnam be able to build its brand.

“The export of several consignments of fruits doesn’t mean that Vietnam has conquered export markets,” he said.

The Ministry of Agriculture and Rural Development (MARD) is compiling a project with consultancy from embassies and Vietnamese agencies abroad which specifies the export strategy for each kind of fruit and each market.

Businesses encouraged to ‘think big’ when investing in agriculture

Many businesses don’t want to invest in farm produce processing because it requires huge capital and brings low profits. Meanwhile, farmers face high risks and take losses during bountiful crops as they are not organized in a coordinated way.