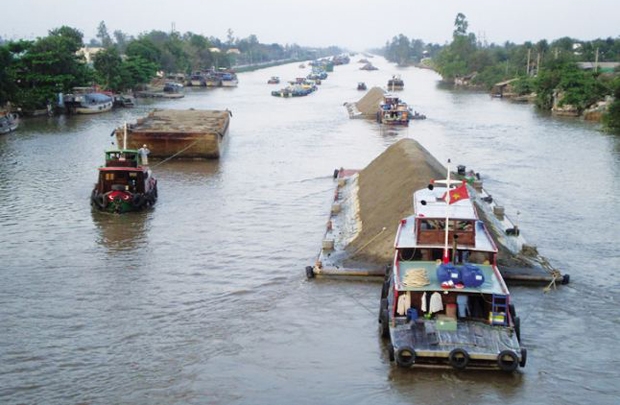 A report shows the total length of waterways that can be exploited is 17,000 kilometers, of which 9,000 kilometers are capable of receiving vessels with tonnage of over 100 tons.

UNESCO lists Vietnam among the 10 countries with the densest waterway transport network.

Meanwhile, domestic waterway transport is believed to be one of the transport modes with outstanding advantages: it has a low investment rate, and can carry high-tonnage cargo, while it is safe and does not cause pollution.

However, Vietnam has not paid appropriate attention to developing waterway transport for many years. Most of ODA capital has been reserved for road transport projects.

Vo Dai Luoc, general director of Asia Pacific Economic Center, said that maritime and waterway transport had not developed well. There are many ports, but most of them are built for local benefits.

“It is more difficult to embezzle when developing waterway projects. Therefore, no one is interested in the projects,” he said.

The expert said it was a mistake to pour too much money into highways.

The investment rate for highways is high in Vietnam, up to $12 million per kilometer, while it is $5 million only in the US. The gap of $7 million is blamed on unreasonable programming and corruption.

In fact, waterway transport once developed rapidly in Vietnam in the 1980s, especially in the Red River and Mekong River Deltas. At that time, it was very difficult to buy tickets for coaches because of the limited means of road transport.

After doi moi (renovation), more highways were built and Vietnamese shifted to travel by land to save time. The investment capital allocated for waterway transport only accounts for 3 percent of total investment in transport.

However, Hoang Hong Giang, head of the Domestic Waterway Transport Agency, said at a workshop held in early August 2016 that waterway just makes up 18 percent of the cargo transport market share.

The Ministry of Transport estimates that Vietnam needs $600 million to upgrade the waterway transport network by 2020.